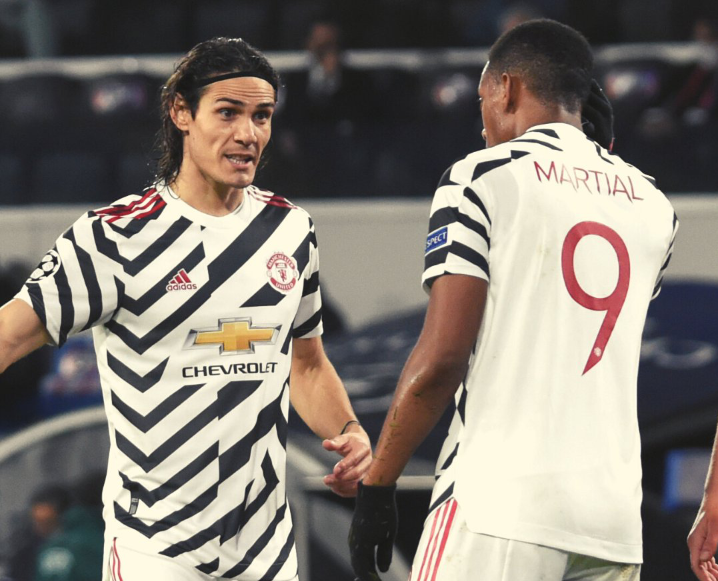 Manchester United will be without the service of Edinson Cavani, Anthony Martial head of their crucial UEFA Champions League game against RB Leipzig on Tuesday.
Manager Ole Gunnar Solksjaer disclosed this during his presser ahead of the must-win game.
Group H qualification ticket to the round of 16 is open for Manchester United, Paris Saint-Germain and Leipzig.
The Reds needs at least a point in order to secure a place in the knock-out stage, and confidence must be high after the superb comeback at West Ham United on Saturday.
However, they will be without Fred who is suspended while strikers Cavani and Martial are out with minor knocks sustained at the London Stadium.
Following the return of David De Gea and Like Shaw who made the trip, Solksjaer will be hoping for a better game.

There is still plenty of firepower at manager Ole Gunnar Solskjaer’s disposal with Mason Greenwood and Marcus Rashford, who both scored at the weekend, and Odion Ighalo all available to lead the line.

Axel Tuanzebe is back in the Champions League squad after missing last week’s home defeat to Paris Saint-Germain due to being banned for accumulating three yellow cards in the competition.

As a reminder, Eric Bailly and Jesse Lingard are also pushing for selection as Ole must ponder which formation to use against the much-vaunted Bundesliga side, who drew 3-3 away to Bayern Munich on Saturday.