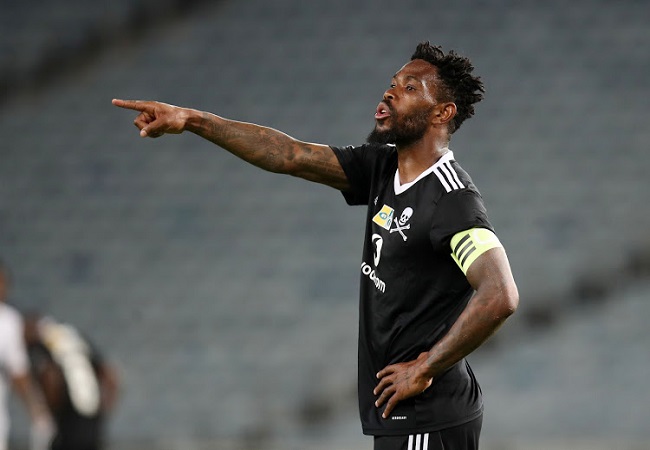 Orlando Pirates will face Bloemfontein Celtic in the MTN8 final at Moses Mabhida Stadium on Saturday (6pm). Having skippered Orlando Pirates in almost every game this season in the absence of seasoned captain Happy Jele, Thulani “Tyson” Hlatshwayo is open to let Jele lift the MTN8 trophy. Provided that Bucs finish crowned in the competition.

Since Hlatshwayo joined Pirates from the now extinct Bidvest Wits before this season started, Jele has found playing opportunities hard to come by. With Tyson preferred ahead of him to partner with Ntsikelelo Nyauza in central defence.

Hlatshwayo has skippered Pirates in seven of their nine matches in all tournaments this season. While Jele has donned the armband on two occasions (against Stellenbosch in October and against Celtic last month).

“We all know … Everyone knows that Happy is the club captain. He’s the one who leads us. For me personally, I would allow him [to lift the trophy]. And I will be OK with it for him and me to lift the trophy.’’ Said Hlatshwayo yesterday.

Talking from his experience with Wits, Hlatshwayo believes winning the MTN8 can help Pirates with the required momentum they need to go all the way to win the league title. In the 2016/17 season, Tyson led the Students to the MTN8 and the league title.

“Obviously, as a player I’d draw inspiration from the very same MTN8 final that we played against Sundowns and won it [3-0 at Mbombela Stadium in October 2016]. A team that starts the season well by winning the MTN8 gets that momentum to do well throughout the season … That’s what we want to do.’’ Said Hlatshwayo, the 30-year-old Bafana skipper.

As a child growing up in Soweto, he dreamt about winning trophies with his local club. Hlatshwayo sees the MTN8 as a perfect opportunity to start realising his dream.

“Obviously, joining the team I grew up supporting as a youngster from Soweto is a success. I came to Pirates to succeed. When I was young I wanted to play for this team and win cups. I feel I have the opportunity to take the first step by winning the MTN8.’’ Said Tyson.