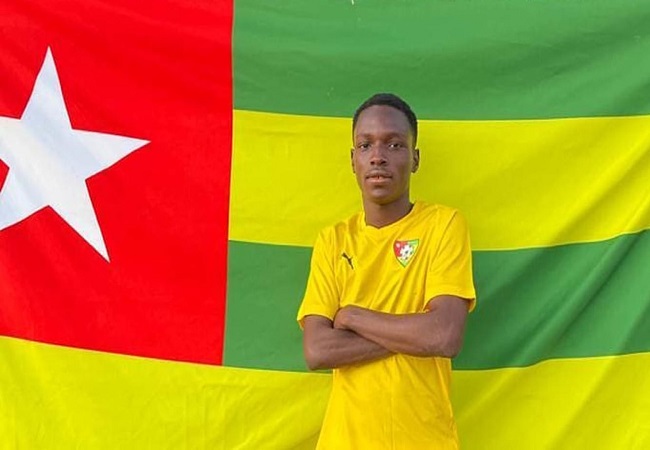 Togo U-20 midfielder Daniel Attisso is a product of Togo’s training Centre, inspired by curator Aharh Ahaware. He is one of the best young talents in the ranks of Junior Sparrowhawks in the recent years.

With his pace, tactical and technical abilities, the young midfielder stands out among his peers. It is therefore hardly surprising that he continues to attract contenders from Europe, especially France.

Born on 11 December 2001, Attisso started playing amateur football in the streets, before joining the Swallows Training Center. His story with football is full of turns, he wrote his first international pages in Benin.

Attisso arrived in Benin, for the sixth edition of the International Tournament of Football Training Centers in 2017.

The young midfielder immediately showed commitment and character. And very quickly, he became the fans’ favorite. He finished the tournament as Best Young Player. Togolese fans have looked him as the coming hope.

“I could hear everywhere that there was a youngster in our squad who was going to become a great player. I’m flattered.” Attisso, who turns 19 in a few days, told CAFonline.com.

A humble reserved but very determined boy and always committed to serve his team, Attisso has this vision that allows him to make the decisive pass and unlock situations on set pieces with his left foot. “He has the qualities to keep, intercept and play forward with passes that cut the lines.” Didier Amegan, one of Attisso’s very first coaches, told CAFonline.com.

He continued to improve, especially on the tactical aspect. And he managed to make the U2-0 Togo squad which is currently playing in the WAFU-B U-20 Africa Cup of Nations Mauritania 2021 qualifying tournament in Benin. He still has more and more time and is keen to fight to achieve his goals as a footballer. “I understand that a lot more is expected of me now. For that, I will fight in every game.” He concluded.