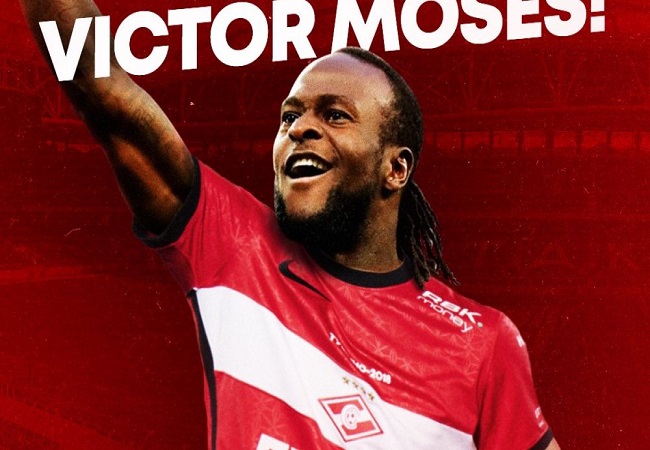 The Nigeria Football Federation (NFF) and Russian Premier League club Spartak Moscow have celebrated with Victor Moses on his 30th birthday. They sent wonderful messages to the former Nigeria international as he reaches a new age.

The versatile forward was born in Lagos on 12 December. But he grew up in England after leaving the West African country at the age of 11.

The forward featured for the England youth teams before switching his allegiance to represent the Super Eagles in 2012.

The winger represented Nigeria with honour during his short time with the West African country. He helpe them to win the 2013 Africa Cup of Nations. He scored twice in the tournament and provided an assist.

Moses also featured for the three-time African champions in the 2014 World Cup in Brazil. And he was one of the standout performers for the side at the 2018 edition in Russia.

The forward made 27 appearances for Nigeria, scoring 12 goals before his abrupt retirement from the national team in 2018.

The winger has been hailed by the NFF and his current club Spartak Moscow as he reaches a new age.

Moses teamed up with Spartak Moscow on a season-long loan from Chelsea in the summer. And he has played seven league games for the side, scoring one goal and providing one assist.

The forward started his career with Crystal Palace before joining Wigan Athletic in 2010. And he made key contributions for the club to earn a big move to Premier League giants Chelsea.

The winger has featured in more than 90 appearances for the Stamford Bridge outfit. And he played a prominent role as they won the 2017 Premier League title.

Moses also helped the Blues win two Europa League diadems and an FA Cup trophy. And he has also played for a number of clubs on loan.