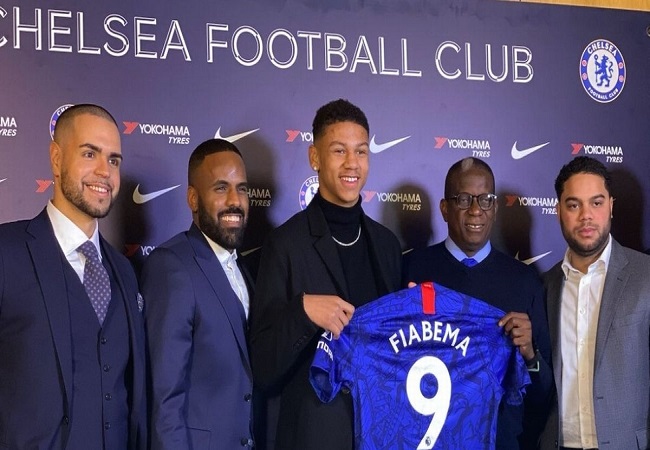 Mina Fiabema declared that his son Bryan Fiabema’s international future lies with the Nigerian National Teams despite the striker being provisionally cap-tied to his country of birth Norway.

Chelsea super kid Bryan comes from a sports family as his father played field hockey back in his secondary school days. And his sister also plays football.

The 17-year-old has had a fine start to the 2020-2021 season, scoring four goals in seven PL 2 appearances for Chelsea U23s. And he was nominated for the Premier League 2 Player of the Month for October 2020.

“Bryan is eligible to represent Nigeria and Norway. I have always advised him to play for Nigeria and he’s actually open to it.” Said Fiabema to allnigeriasoccer.com.

“The last World Cup we went for, he asked me to buy him a Nigerian jersey. So he loves Nigeria. But unfortunately he hasn’t been there“.

Fiabema Snr revealed that his son was crazy about former Real Madrid striker Cristiano Ronaldo in his formative years as a footballer. And he started out his career as a winger before he was converted to a number 9 by Norway’s U17 national team, then Chelsea.

“I don’t know if he idolises any Nigerian player. I only know of one international player he idolises and follows. And that player is Cristiano Ronaldo.”

“He models his game after Ronaldo. When he was younger he always asked for boots with CR7. He’s grown now. So he’s beginning to be himself. When he was much younger, he walks and balances like him. Everything about him was Ronaldo. He has speed and is good at dribbling.” He added.

Fiabema played non-binding games for Norway’s U15 and U16 national teams. But he became provisionally cap-tied to the Scandinavian nation when he started against Bulgaria in an U17 EURO qualifier in October 2019.