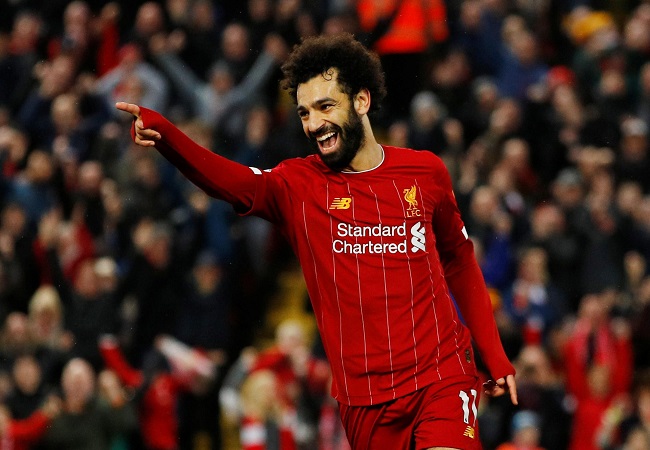 Mohamed Salah has been a revelation since joining Liverpool from Serie A side Roma in 2017. He then led the Reds to Champions League and Premier League glory.

The Egypt international’s exploits have not gone unnoticed at Anfield amid speculation linking him with Spanish giants Madrid and Barca.

With regard to if he could rule out a transfer to either of the La Liga powerhouses, Salah told Diario AS. “I think Madrid and Barcelona are two top clubs.

“Who knows what will happen in the future. But right now I am focused on winning the Premier League and the Champions League with Liverpool again.”

Pressed on his future and how much longer he sees himself playing for Liverpool, Salah replied. “That’s a tough question. But right now I can say that everything is in the hands of the club.

“Of course, I want to break records here and, I repeat, all the club records. But everything is in the hands of the club.”

Salah has scored a joint-high 11 Premier League goals for reigning champions Liverpool this season, following his strike in the 2-1 win over rivals Tottenham midweek.

The 28-year-old has netted 14 across all competitions as leaders Liverpool prepare for Saturday’s trip to Crystal Palace.

In 21 Premier League appearances in December, Salah has scored 17 goals and assisted a further nine, averaging a goal or assist every 66 minutes. It is his best goal involvement ratio in any month in which he has played more than one game, as per Opta.

“I would like to break all the club records, that would be fine. But yeah, it’s like I said, the team comes first before any record.” Salah said. “But breaking records and winning matches, that’s great too.”

Liverpool top the table by three points, ahead of Tottenham after 13 games, and Salah added. “I think it is a bit early to say that [Liverpool are title favourites]. But yes, we are doing well just like other teams. I hope we have the best chance of winning it.”