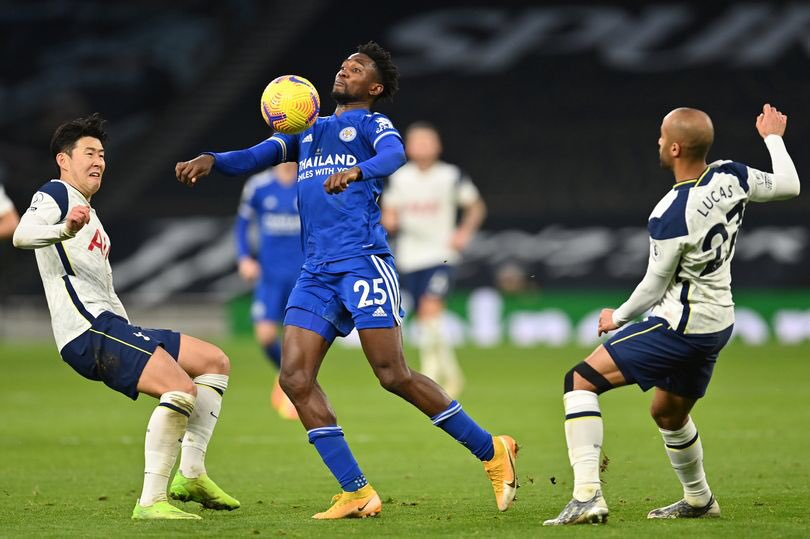 Wilfred Ndidi is amazed at Leicester City 2-0 victory and clean sheet against Tottenham at the New Tottenham Stadium on Sunday.
The Foxes put an impressive performance and stunned Spurs to go second place in the Premier League.
Ndidi superb performance in the game was crucial to his side win as he was voted Man Of The Match.
The Super Eagles midfielder in the course of the game made 100 per cent pass accuracy.
He made nine ball recoveries, won three tackles and intercepted two balls as he was awarded the Man Of The Match for his outstanding performance.
A Jamie Vardy penalty and Toby Alderweireld’s own goal gave Leicester City the convincing victory.
Ndidi took to his Twitter account to celebrate the win which sees the Foxes go second on the table heading to the Christmas celebration.
He wrote; “Amazing feeling to get 3 points and a clean sheets away from home” 💙🦊 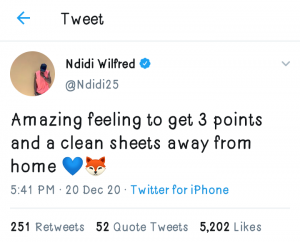 In the same vein manager Brendan Rodgers hailed his side  excellent form.

While speaking with LCFC TV, Rodgers said his side were dominant throughout the game from the kick off.

“I’m so pleased. Right from the first whistle, we took the initiative in the game.

“We wanted to impose our way and show confidence.

“But I think what was pleasing is how we learnt from the last time we were here.

“We were 3-0 down and they played on the counter-attack.

“So, this was a game strategically where the players were first class in how they blocked off the space.

“We didn’t give away too many counter-attacks and we showed really good balance in our game.”