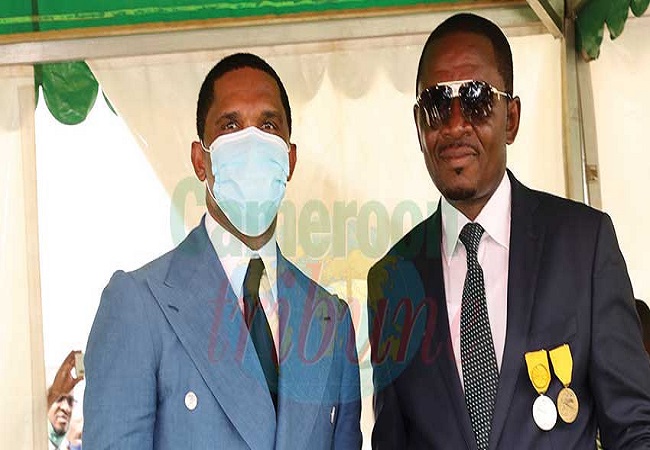 Cameroon’s iconic footballer, Samuel Eto’o Fils has once more been recongnised for his good works in the sports scene as well as in the philanthropic domain. He was named Citizen of Honour of the Yaounde VI municipality during a heavily-attended ceremony organised on December 21, 2020 at the premises of the council. Legendary football personalities, artists, and several other stakeholders were present to witness the grandiose event.

The Mayor of the Yaounde VI Council, Jacques Yoki Onana, speaking during the ceremony, underlined that Samuel Eto’o’s influence in the national and international scenes cannot be undermined. He took off time to outline his past glories and recent social undertakings which make him eligible to be honoured with such a title. Samuel Eto’o on his part encouraged the Mayor who is at the forefront of local development of his municipality. The legendary footballer as well pledged to support the council financially on yearly basis. These funds, he advised, should be particular used in helping children.

Aside honouring Samuel Eto’o with the title of Citizen of Honour, the iconic footballer was given a symbolic key which automatically gives him access to the council at any time. The surprises kept on pouring in as an effigy of Samuel Eto’o was mounted at the council premises. While unveiling this effigy, the Mayor said that he was giving honour to whom honour is deserved.

Lionesses’ captain, Aboudi Onguene present at the ceremony, said the exploits of Samuel Eto’o Fils is a source of inspiration and a call for her to work harder.

The ceremony was a double-sided one which involved the giving of Christmas gifts to vulnerable children. Especially Internally Displaced Children from the North West and South West regions, children with disabilities and the sick. Samuel Eto’o symbolically handed the gifts to some of them.