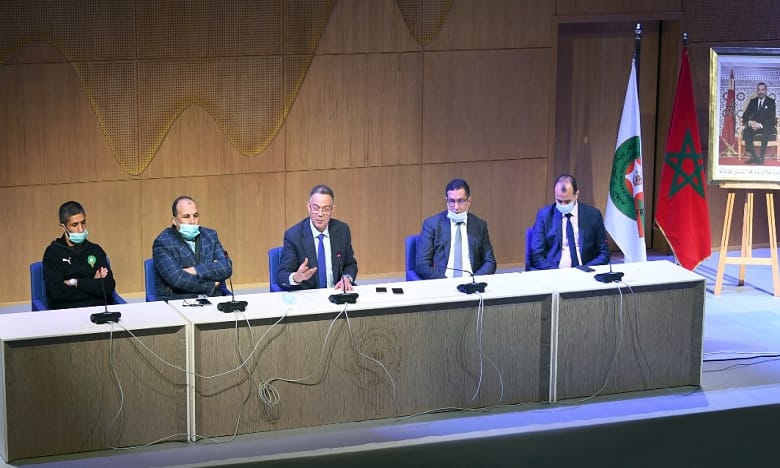 Morocco’s under-20 team has secured its qualification for the next Africa U20 Nations Cup to be held in Mauritania in February 2021.

Fouzi Lekjaa, the president of the Royal Moroccan Football Federation, welcomed the members of the U20 national team on their return from Tunisia after their last match against Libya in Rades (1-1), to congratulate them on this qualification, 15 years after Morocco’s last participation in the CAN U20.

Can we say that Moroccan football is doing well? In terms of results, the answer is yes. After a 20-year absence from the World Cup, the Atlas Lions participated in the 2018 edition in Russia. Scenes of popular jubilation in the Moroccan streets from Tangier to Lagouira will long be remembered after the victorious match against Ivory Coast (2-0) in Abidjan, which propelled Mountakhab to Russia.

In the African Cup of Nations, Morocco managed to reach the quarter-finals in 2017: it had been 13 years since the Moroccans had been waiting for this (since the 2004 CAN in Tunisia, when Morocco lost in the final against the host country). In the CAN 2019, Morocco again managed to get through the group stage but sadly bowed to the penalty against Benin in the round of 16.

On the younger side, the U20 Lion Cubs have just composted their ticket for the CAN 2021 which will be played in Mauritania even though they had not set foot there since the 2005 edition. The young U17s are already qualified for the CAN U17 which will take place in Morocco starting from 13 March 2021.

The futsal is not yet to be outdone indeed, the national team has won the last two African Cup of Nations, including the 2020 home edition in Laayoune. The Moroccan futsal team is now ranked 21st in the FIFA rankings, and is considered as the first team in Africa.

Considerable progress is the result of extensive work done by the Royal Moroccan Football Federation for several years. After a restructuring of the National Technical Directorate, the Federation has set concrete and ambitious goals for each category, not to mention the clubs of its championship. And as proof, Morocco claims to have had 4 clubs in the semi-finals of the Champions League and the CAF Confederation Cup in 2020. A record that demonstrates the good organization and balance of Botola’s clubs. Moreover, the Moroccan championship dominates the ranking of the African championships of the CAF, including 3 clubs in the top 10.

These three clubs, Raja, Wydad and Berkane, have won four major trophies in Africa in recent years: the Champions League, the CAF Cup (2) and the CAF Super Cup.

These achievements would not have been achieved without the effort made in infrastructure development. The FRMF has decided to equip the whole kingdom with high-level infrastructure that allows clubs to provide professional training to players, but also to national teams to prepare for competitions. Apart from the Mohammed VI Football Complex, a jewel of modernity, each regional league (there are 12) has a federal football center (the Saidia Academy for example) and each club will have a training center (like THE FUS and Raja).

Sports-study courses have also been launched across the country, bringing together the best selected elements after detections organized by the regional technical directorate and the DTN.

Another major project on women’s football was launched at the initiative of president Fouzi Lekjaa. This is the contract of goals that concerns the development of women’s football. The National Women’s Football League was created in November 2019 and the President is a woman from the world of football: Ms. Khadija Illa, President of the Laayoune club.

The LNFF is preparing to launch the first national professional championship for the 2020-2021 season and the grants allocated to clubs have increased sixfold (to reach 6 million euros). A thousand technical managers will be trained specifically for women’s clubs and the FRMF aims to train 90,000 practitioners by 2024. The aim is to establish itself on the continental and world stage.

Morocco is reaping the rewards of its work and does not intend to stop there. Indeed, the technician Reynald Pedros, who won two Champions Leagues with Olympique Lyonnais, has recently become coach of the Moroccan women’s national team.