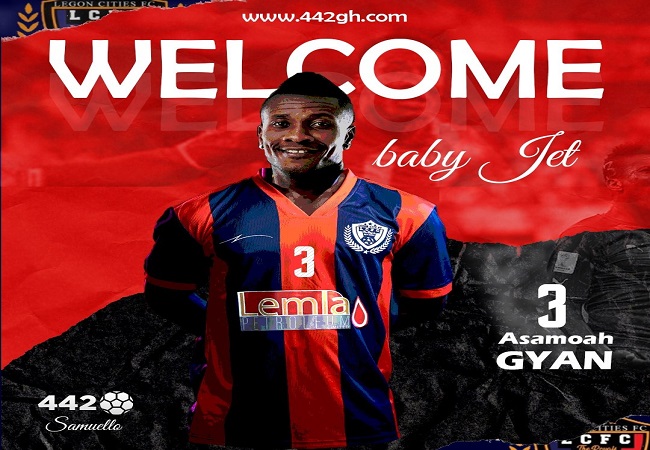 Ghana veteran striker Asamoah Gyan made a great return to Ghana football. He signed at Ghana Premier League (GPL) Giants Legon Cities last transfer window end. And he has been praised for his decision to move back home after 17 years abroad

Asamoah Gyan’s decision to return for a last hurrah in the Ghana Premier League has been commended by former Netherlands and Aston Villa midfielder George Boateng.

The 35-year-old erstwhile Sunderland, Stade Rennais and Udinese forward made a comeback after 17 years abroad in October. He signed a short-term deal with Legon Cities. He has so far made three appearances for his new side.

“I think it is a brave move.” Boateng told Joy Sports. “If you are a young footballer and you want to make it in the game and you have a huge star like Gyan playing beside you, you can’t get a better way of motivation than that.

“For those who are playing, not only with him but the others in the league, it is outstanding.

“You see an ex-star who has been the country’s captain for many years, playing in the league you’re playing, you have to go by that as an inspiration.” He continued.

Gyan featured for Liberty Professionals in the Ghana Premier League before leaving for Udinese in Italy in 2003.

“The most important thing is that they were serious about the contract. I am a very serious guy despite people seeing me as a funny guy as well. But when it comes to work, it is work. Everything is about seriousness.

“I am in Ghana and I am home. I signed for this club. Because they have a huge project. They want to change Ghana football. I came here for a reason. So while I am enjoying football, we are also doing things behind the scenes to benefit Ghana football.”

He is currently the Black Stars all-time top scorer and most capped player with 51 goals in 109 appearances, and as well Africa’s top scorer at the World Cup – with six goals.