The Ambazonian Governing Council has warned CAF not to stage the forthcoming 2021 CHAN competition in their territory.

Cameroon will host the 2021 CHAN in various Stadia across the country from January 16-February 7 2021 Victoria as one of the city to host the competition.
However, Ambazonia has lay claim to the territory and have asked CAF not to stage the competition in the territory due to security reasons.

Read Also: CAF Has Given Green Light To Spectators To Attend CHAN 2020 In Cameroon

For more than four years, there have been war as the people are fighting for their self independence.
The Ambazonia Governing Council in a statement issued and signed by Dr Larry Ayamba and addressed to  CAF acting President, Constant Omari Selemani warned CAF and other participating team scheduled to play in Victoria (Limbe).
The letter titled “Termination of Victoria (Limbe) as Stadium for African Cup of Nations 2021”, reads as follow;
“We are writing to you with regard to the planned organisation of the African Nations Championship (CHAN) to be hosted by La Republique du Cameroun from Jan 16-Feb 7 2021. 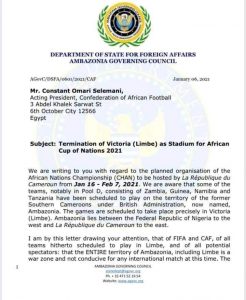 ” We are aware that some of the team notably in pool D, consisting of Zambia, Namibia and Tanzania have been scheduled to play on the former  territory of the Southern Cameroons under British Administration, now named Ambazonia.
“The games are scheduled to take place precisely in Victoria (Limbe).
“Ambazonia lies between the Federal Republic of Nigeria to the west and La Republique du Cameroun to the east. 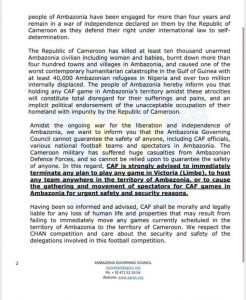 ” I am by this letter drawing your attention, that of FIFA and CAF of all teams hitherto scheduled to play in Limbe and of all potential spectators: that the entire territory of Ambazonia including Limbe, is a war zone and not conducive for any international match at this time.
“The people of Ambazonia have been engaged for more than four years and remain in a war of independence declared on them by the Republic of Cameroon as they defend their right under international law to self determination.
” The Republic of Cameroon has killed at least ten thousand unarmed Ambazonia civilians including women and babies, burnt down more than four hundred towns and villages in Ambazonia and cause of one of the worst contemporary humanitarian catastrophe in the Gulf of Guinea with at least 40,000 Ambazonian refugees and over two million internally displaced. 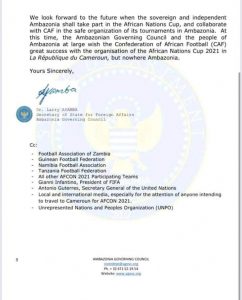 “The people of Ambazonia herebyninfor you that holding any CAF game in Ambazonia’s territory amidst these atrocities will constitute total disregard for their suffering and pains and an implicit political endorsement of the unacceptable occupation of their homeland and impunity by the Republic of Cameroon.
“Amidst the ongoing war for the liberation and independence of Ambazonia, we want to inform you that the Ambazonia Governing Council cannot guarantee the safety of anyone, including CAF officials, various national football teams and spectators in Ambazonia.
“The Cameroon military has suffered huge casualties from Ambazonia Defence Forces and so cannot be relied upon to guarantee the safety of anyone.
“In this regard, CAF is strongly advised to immediately terminate any plan to play any game in Victoria (Limbe), to host any team anywhere in the territory of Ambazonia or to cause the gathering and movement of spectators for CAF games in Ambazonia for urgent safety and security reasons.
“Having been so informed and advised, CAF shall be morally and legally liable for any loss of human life and properties that may result from failing to immediately move any games currently scheduled in the territory of Ambazonia to the territory of Cameroon.
” We respect the CHAN competition and care about the security and safety of the delegations involved in this football competition.
“We look forward to the future when the sovereign and independent Ambazonia shall take part in the Africa Nations Cup, and collaborate with CAF in the safe organization of it’s tournament in Ambazonia.
“At this time, the Ambazonian Governing Council and the people of Ambazonia at large wish the Confederation of Africa Football (CAF) great success with the organization of the Africa Nations Cup 2021in La Republique du Cameroun but, nowhere Ambazonia.”