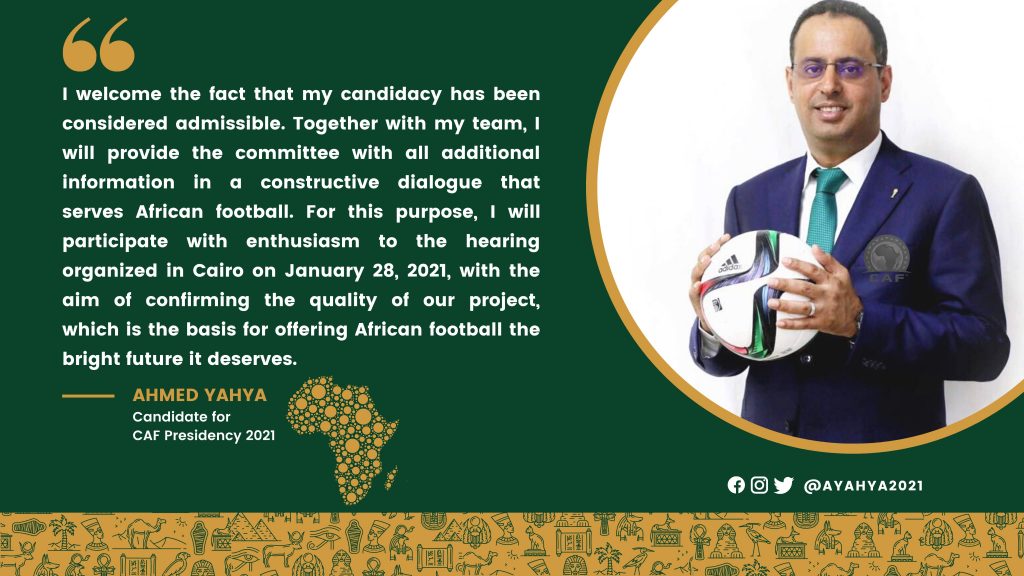 “I welcome the fact that my candidacy has been considered admissible. Together with my team, I will provide the committee with all additional information in a constructive dialogue that serves African football. For this purpose, I will participate with enthusiasm to the hearing organized in Cairo on January 28 2021 with the aim of confirming the quality of our project, which is the basis for offering African football the bright future it deserves,” Yahya tweeted.

His tweet came hours after CAF’s Governance Committee carried out the eligibility checks for Executive Committee and presidential candidates.

CAF announced that while the candidacy of Yahya and Patrice Motsepe from South Africa were found admissible, they were subject to additional checks.

“Their candidatures were deemed admissible. However, the committee considered that further checks are necessary before a final decision. To this end, a hearing of these candidates will be organized in Cairo on 28 January 2021,” reads CAF website.

CAF will elect for a four-year term the successor of Mr. Ahmad Ahmad at the 43rd Elective Ordinary General Assembly, scheduled for 12 March 2021 in Rabat, Morocco.

In addition, for candidates for the FIFA Council, the eligibility check is underway at the level of FIFA bodies and the result will be communicated in due course.