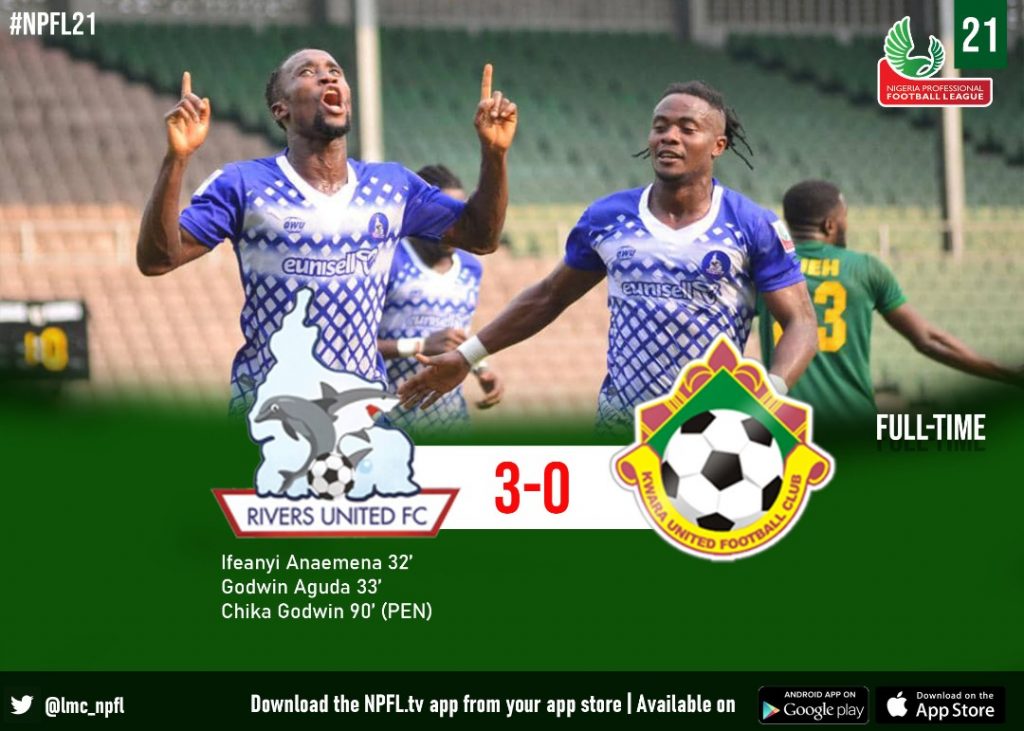 Rivers United maintained their unbeaten streak in the 2020/2021 NPFL season with an emphatic 3-0 win against Kwara United on Sunday.
The Pride of Rivers having won their firey two games, welcomed Kwara United who stunned Plateau United  2-0 in Jos to the  Adokiye Amiesimaka Stadium.
Coach Stanley Eguma made five changes to the squad that defeated Abia Warriors in Aba on Matchday 2.
Rivers United took charge from the onset and almost got in front just five minutes of play.

Konan Ruffin swung in a cross for in-form Omoniwari who rose high and head in for goal but Kwara goalkeeper a Abdullateef punched the ball away for safety.
Kwara United were forced into an early substitution in the 13th minute as injured Kabir Balogun came out for Joshua Agboola.
The host broke the deadlock in the 32nd minute through Ifeanyi Anaemena who scored a header after a howler from Kwara goalkeeper.
Godwin Aguda continued to prove his mettle in front of goal as he immediately doubled the lead in the 34th minute.
Build up to the goal saw Stephen Gopey dribble past his marker before he flipped the ball to an unmarked Aguda who made no mistake and scored.
Kwara United were kept at arms length by Rivers United as the visitors barely threatened the hosts with the first half ending 2-0.
The half time team talk spurred Kwara United as they returned back to the pitch looking more dangerous and threatening to score.
Jide Fatokun almost pulled one back for Kwara after he 2as left unmarked but he ended up missing the begging chance.
In the 50th minute,  Joshua Agboola’s effort was thwarted by Ruffin to keep his team 2-0 lead in tact.
Kwara United were reduced to 10- men in the 77th minute after Afeez Nasiru was given a marching order for his reckless tackle on Rivers United player Kazie Enyinnaya.
Chika Godwin put an icing on the cake from the spot in the 90th minute after Ijeh Isaiah used his hand to block Ishaq Kayode’s shot.
With the resounding win, Rivers now top the NPFL league table with nine points and are also yet to concede.