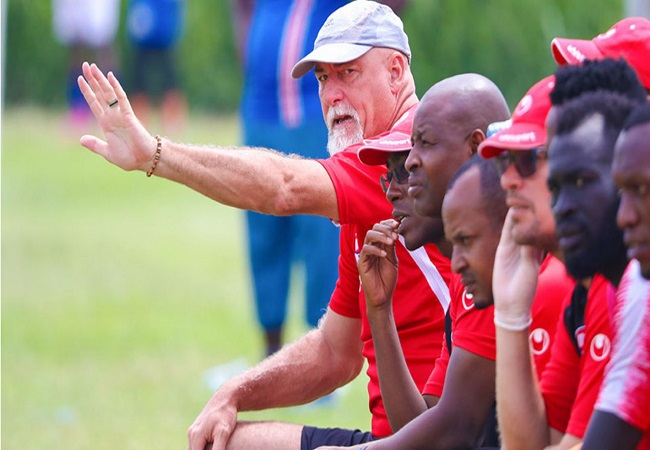 Tanzania champions Simba SC have been in search of new coach as they parted ways with Vandenbroeck. Hence, rumours have been spreading linking them with the return of former coach Patrick Aussems. The Wekundu wa Msimbazi have opened up to deny such rumours.

The Belgian tactician left the Wekundu wa Msimbazi at the start of 2019-20 season with Vandenbroeck coming in as the replacement.

After a successive campaign with the team, Vandenbroeck finally left the club two weeks ago. And FAR Rabat of Morocco have already signed him.

With Simba now searching for his successor, reports have emerged that Aussems has already been picked to take over the mantle at the club.

However, Simba secretary-general Arnold Kashembe has admitted many coaches have shown interest to replace Vandenbroeck. But he dismissed claims they had settled on Aussems return.

“There are so many coaches who have applied to come to Simba including Patrick [Aussems]. But we have not given him the job. Those are just rumours. If we get a new coach, we will put it in the public for everyone to see.” Kashembe said as quoted by Sokalabongo.

“The process is still ongoing. And it is true there are many names of those who want to coach Simba. It is clear Simba is a great institution so everyone wants to work for the team.”

In a recent interview, Aussems revealed he is ready to return and take charge of the champions again.

“I am very ready for a return. They now have a stronger squad than what I had in the previous two seasons.” Aussems told Mwanaspoti.

“I am ready to come back if at all I will receive a call from the club’s owner. But it would also be right to confirm that I have got other offers from some African teams.

“I lived with Simba quite well. And I know the doors are still open and for that reason, I will prioritise them over any other team that would approach me.”

The coach further pointed out key areas that would convince him to rejoin the 2020 treble winners. “If you look at Simba’s players individually, then you will see that they have incredibly improved. And that is always a boost for any coach.” The retired defender said.

“And for that reason, I am ready to come back if and when they will ask me to. It would be easy for me to take charge as they are already accustomed to my way of play. Attacking football that is meant to entertain everyone including the fans.” He added.