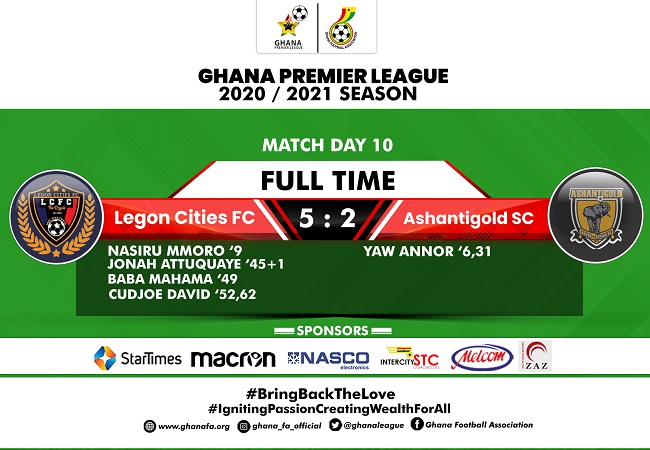 Legon Cities Football Club made a great achievement on Friday. As the Royals beat their Ghana Premier League counterparts AshantiGold SC 5-2. It was during their match day 10 fixture at the Accra Sports stadium.

Asamoah Gyan teammates twice came from behind to defeat the Miners. The result in their second win has temporarily moved the Royals to 15th place in the standings with 9 points ahead of the other Premier League matches on Sunday.

Coach Bashir Hayford made three changes to the squad that lost 2-1 to Aduana Stars last weekend. As Baba Mahama returned from suspension.

For AshantiGold, Isaac Opoku Agyemang made way for captain Amos Addai in the starting line up. As he returned from a two week stay on the side-lines.

The Miners took the lead as early as the 6th minute after Yaw Annor punished goalkeeper Fatau Dauda following a howler to bury the ball into an empty post.

The lead was short lived as lasted only three minutes as Nasiru Moro scored a sumptuous goal to draw them level in the 9th minute.

Annor restored the advantage for AshantiGold in the 31st minute. But Cities pulled parity for Legon Cities in the 45th minute, few seconds from the break through Jonah Attuquaye.

Baba Mahama put the Royals ahead just four minutes after the break after connecting beautifully with David Cudjoe.

The provider later became the scorer in succession. David Cudjoe increased the tally for the home side in the 52nd minute. The youngster put the game beyond the reach of the Miners ten minutes later with a sublime finish to seal an emphatic victory for Cities to record their second win of the campaign.

AshantiGold got the opportunity to reduce the deficit from the spot. But Legon Cities goalkeeper Fatau Dauda saved Annor’s kick.

Cities ended the match with 10 men after central defender Nicholas Mensah was sent off for a cynical tackle.

Legon Cities next assignment is against Inter Allies FC on match day 11. While,  AshantiGold tackle Asante Kotoko SC in the Asanteman derby at the Len Clay stadium next Sunday.