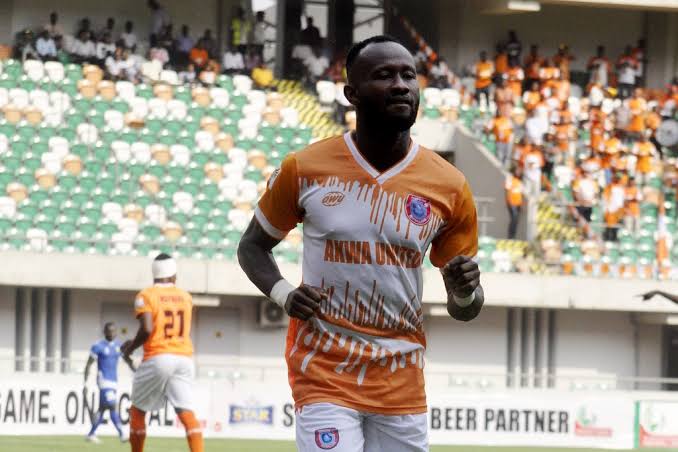 Akwa United forward Mfon Udoh is at the verge of equaling Anyhony Okpotu’s record of goals scored in the Nigeria Professional Football League (NPFL)
Udoh was on target for the Promise Keepers who lost 2-1 to Heartland FC on Matchday 6 of the NPFL on Sunday at the Dan Anyiam Stadium in Owerri.
The former Enyimba forward scored in the 33rd minute to put Akwa United in front.

However, goals from Emeka Nnoshiri in and Ese Pascal in the 48th and 80th minute turned the tide on it’s head as Akwa lost the game.
For Udoh, he is now one goal from matching Okpotu’s 71 NPFL career goals tally.
The forward has also scored six goals on the road for Akwa United.
He was joint top goalscorers in the 2018/2019 Eunisell Golden boot award with Nasarawa United player Sunusi Ibrahim.