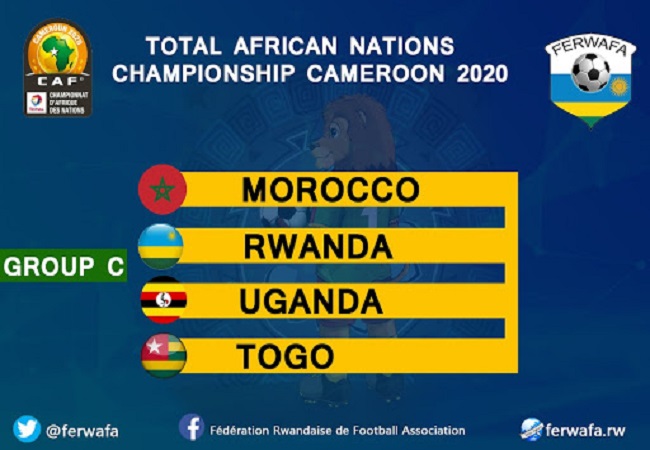 Chan 2020 group C will play the last group games this evening in Cameroon. Morocco top the group with four points. Togo are second with three. Rwanda third with two, while neighbours Uganda are bottom with one point. Each of the four teams still with a chance to qualify for the next round, only two sides to continue.

Rwanda take on Togo in one of the final two ties of Group C at the ongoing African Nations Championship knowing that only a win will earn them a quarterfinal berth.

Amavubi, who have neither scored nor conceded a goal yet, head into Tuesday’s clash with two points from earlier draws against Uganda Cranes and champions Morocco.

Below are the chances of each of the Group C teams to qualify for the last eight.

The defending champions need just a draw against Uganda to reach the next stage. However, a win would be a better result to wrap up this stage topping their group table and potentially avoid a tough opponent in the last eight.

The Atlas Lions have been unconvincing in their last outings against Togo and Rwanda. As their forward line, led by Wydad Casablanca’s Ayoub El Kaabi, struggled upfront, with their lone goal at the showpiece coming in the form of a penalty against West Africans Togo.

Another goal shy display against Johnny McKinstry’s side could cost them a place in the quarter-finals. But the North Africans are certainly capable of going all the way.

A surprise win against Uganda on Friday, 22nd January, boosted debutant Togo’s chances of going past the group stage. And a draw against Amavubi could be enough for Franck Dote’s team to progress to the quarter-finals.

Togo lost their first game against Morocco before bouncing back with a well-deserved 2-1 win against Uganda.

The Amavubi on Sunday, 24th January, travelled to Limbe, where their make-or-break tie against the Togolese will be played. For Rwanda, their work is cut out for them. Only a win can see them through.

Journalists covering the tournament say that Head Coach Vincent Mashami’s recent training sessions focused on sharpening his team’s attack hoping to end a long-standing goal drought when they come up against tricky Togo.

There has been speculation that Mashami could shake up his starting front-line with Lague Byiringiro tipped to start.

Amavubi know they must put the ball in the back of the net and ultimately beat Togo if they are to extend their stay in Cameroon. Anything less and they will bow out.

Despite making five appearances in the past six editions of the CHAN tournament, Uganda have never made it past the group stages.

Their hopes of progressing to the last eight could be dealt yet another huge blow if they fail to overcome Morocco.

Bottom-placed Cranes are very much still in the tournament. But they may need a big win against the Arabs to progress to the knock-out round.