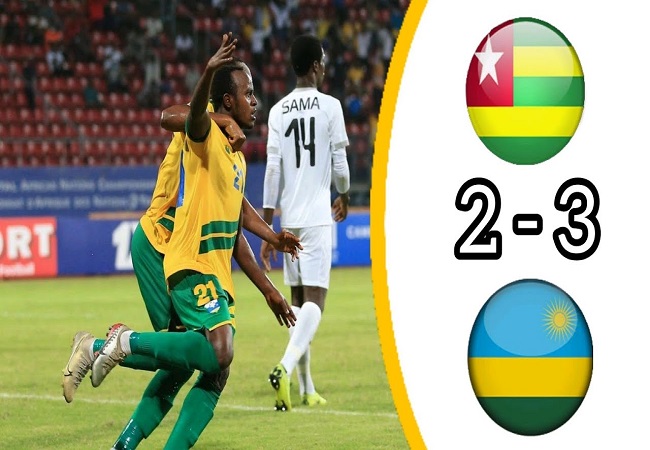 Rwanda kept their promise for CHAN 2020 group C last game. Amavubi advanced into the quarter-finals after beating the Sparrowhahcks of Togo 3-2 at Omnisport Stadium in Limbe. Rwanda emerged second from Group C with five points behind Morocco.

Former Gor Mahia striker Jacques Tuyisenge could have scored Rwanda’s opener in the 19th minute but instead blasted wide from close range. Yendoutie Nane gave Togo the lead in the 38th minute when he found the back of the net from a cross delivered by Ismail Ouro-Agoro.

Olivier Niyonzima restored parity for Rwanda just before half-time when he superbly connected to a cross from Emery Bayisenge. Bilal Akoro put Togo ahead when the opponents failed to close in on him in the second half.

Tuyisenge brought his side level on the hour mark when he headed past Abdoul Moubarak Aigba in Togo’s goal, before Ernest Sugira then scored the winner in the 66th minute to ensure the Eastern Africans progressed.

Meanwhile, Uganda saw their ambition of earning a first-ever place in the quarter-finals vanished. Atlas Lions were too strong for the Cranes. Uganda failed again to advance to the quarter-finals of the African Nations Championship (CHAN) after a 5-2 defeat to Morocco.

The Cranes needed a win against the reigning champions in order to book a place in the knockout phase. Their 2-1 loss against Togo in the second group game complicated their chances of booking a maiden slot in the second round.

A brace from Soufiane Rahimi, goals from Ayoub El Kaabi, Hamza El Moussaoui and an own goal by Charles Lukwago gave the North Africans the victory as they aim to retain the title.

Ibrahim Orit and Saidi Kyeyune scored the goals for Johnathan McKinstry’s side. As they exited the competition in Cameroon with just one point. Achievement that came from an opening 0-0 draw against Rwanda.

The Cranes started the match brightly when they grabbed an opener in the 25th minute by Orit after poor defensive judgement by the Atlas Lions.

Al Kaabi, Reda Jaadi and Rahimi had chances to score for Morocco. But they were all wasted. They then had a chance to equalise before the half-time break from a penalty when Mustafa Mujuzi handled the ball in the box.

El Kaabi scored the penalty. And he became the first player to score 10 goals in a Chan competition.

Morocco grabbed the lead just after the second half started via Rahimi’s effort before they added the third in the 71st minute from El Moussaoui strike.

Rahimi made it four when he scored his second of the night with 10 minutes left. But Kyeyune added the second for the Cranes in the 84th minute to reduce the deficit. Lukwago then after bundled the ball into his own net in stoppage time.