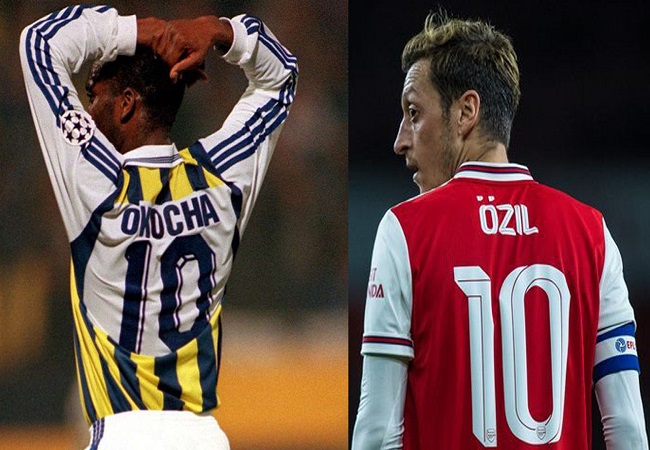 Former Nigeria captain Jay-Jay Okocha has backed Mesut Ozil to succeed at Fenerbahce. And he suggested they have similar careers. The Super Eagles legend has reacted to the statement of the 2014 World Cup winner following his presentation at Fenerbahce.

During his media presentation on Wednesday, Ozil described Okocha as the star he followed at Fenerbahce. And he recalled wearing his no.10 shirt with the Nigerian legend’s name written at the back.

“About 20-25 years ago, I was an immigrant Turkish kid who was running after the soccer ball with the Fenerbahce shirt with the number 10 Jay Jay Okocha written on his back in the streets of Gelsenkirchen. Thankfully, it was my honour to wear this jersey that I have been dreaming of for many years.” The former Germany international tweeted.

Meanwhile, the 47-year-old was reached for his response to Ozil’s comments. And he feels honoured to get such recognition from ‘a world star player’.

Okocha who won two titles during his stint in Istanbul, tipped the ex-Arsenal star to boost Fenerbahce’s charge for the Super Lig crown this season. They are two points behind leaders Besiktas.

“I was very happy. I did not know about the last tweet Mesut Ozil posted.” Okocha told Goal. “It is very pleasing to be the idol of such a world star player, to inspire him.

“Mesut is a world-class player. It is a very good thing [for him] to come to Fenerbahce. I think he will definitely be successful in Fenerbahce.”

Before calling time on his career, Okocha had spells in Germany, England, France and Turkey. And he thinks Ozil is treading a similar path having previously played in Germany and England.

“Mesut’s career is similar to mine. We both played in Germany and England. And he came to Fenerbahce like me now. I am very happy.” He concluded.