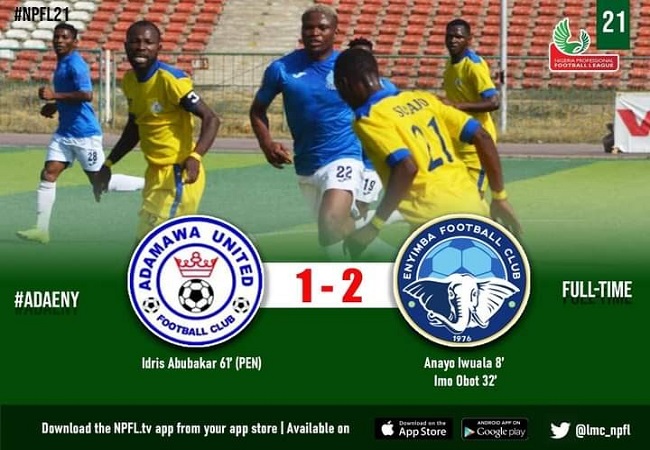 Enyimba FC have struggled to show consistency in their results since the start of the 2020/2021 season. But in the last three games, the team have been able to raise their game. And on Monday, Fatai Osho’s men were able to put up a solid performance that saw them defeat Adamawa United away.

The People’s Elephants started the game strongly. And deservedly, they took the lead in the 8th minute through their very exciting winger, Anayo Iwuala.

In the 32nd minute, left back Imo Obot doubled the lead for the People’s Elephant. They who held on to their two goals lead until the end of the first half.

In the second half Adamawa United mounted pressure on the Enyimba defense. And in the 62 minutes, Idris Abubakar reduced the tally from the penalty spot. But Enyimba FC held on till the end of the game.

The Players that caught fancy in the match include Nelson Ogbonnaya, Hassan Abubakar, Anthony Omaka and, of course man of the match, Anayo Iwuala.

At this point it is necessary to point out that Monday’s win is the second time Enyimba has beaten a particular side away from home in back to back seasons since the turn of the century. The last time Enyimba did that was in 2012 & 2013 against Heartland FC ( 3-2 & 1-0 respectively). Those Enyimba sides were led by Austin Eguavoen and Salisu Yusuf respectively.

With the win against Adamawa, Fatai Osho has also earned his place in Enyimba FC’s record books. As he has become the first coach since the turn of the century that has been able to defeat a particular team in back to back away league meetings. (Remember Enyimba defeated Adamawa United 2-0 away last season).