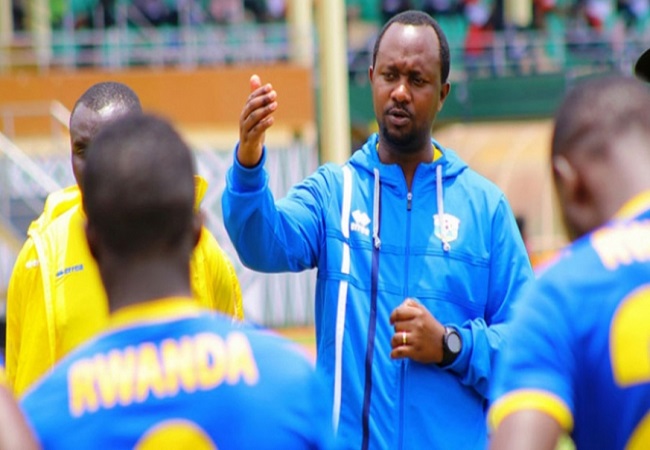 Rwanda coach Vincent Mashami is happy with the overall performance of the team at the African Nations Championship (CHAN) despite dropping out at the quarter-final stage.

The Amavubi crashed out in the quarterfinals of the 6th edition on Sunday. As they suffered 1-0 to Guinea at the Limbe Stadium in Limbe. They conceded the goal further to a free kick strike from Yakhouba Barry that went past substitute goalkeeper Yves Kimenyi.

Mashami says the overall performance was good. And that he and the team will learn from mistakes that cost them a historic semi-final place in the tournament.

“First of all, I want to congratulate Guinea for a hard fought win. They are an organized team with and without the ball.” Mashami said.

“I think we played well. We tried to compete but lost the tie through a few errors. But that is football.” Mashami explained adding that the team should be proud and learn from their mistakes. Amavubi fans however criticize referee for Kwizera red card.

A cross section of Rwandans took to social media platforms especially Twitter to criticize Moroccan referee Samir Guezzaz for giving goalkeeper Olivier Kwizera a red card after he accused him of a harsh challenge on Guinea striker Yakhouba Barry.

However video replays showed that the goalkeeper didn’t touch the Guinea striker. And he should have instead been booked for diving.

Mashami weighed in on the incident adding that red card to Guinea added pressure on his team. Because it made it seem like they had to win at all costs.

“I believe we didn’t handle well the opportunity that we got by having one more player on the field. The players were in a hurry to score a goal and failed to be calm and composed in front of goal. That is a lesson that they will learn from.” Mashami said adding that the Guinea striker should have been booked for diving.

Guinea will now face Mali in Douala on Wednesday in a West African derby.