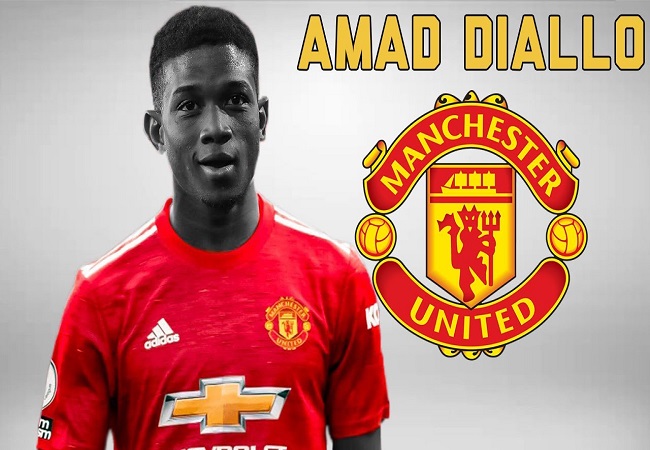 Amad Diallo, Manchester United’s new Ivory Coast-born signing has been described as having some of the qualities of African great Samuel Eto’o.

Diallo, who joined the Premier League side from Italians Atalanta in January, has also been compared to fellow Ivorian Gervinho, who played in Serie A for both Roma and Parma.

Emmanuel Agyemang-Badu, who played nearly a decade for Ghana’s national team, left Italy in December after over a decade with Udinese and then Verona.

“He has this quality of Eto’o’s of being very strong on the ball, knows how to hold the ball and is a good passer. (He is like) Gervinho when it comes to pace.”

Eto’o won four Champions League and three La Liga titles during a stellar career for some of Europe’s top clubs. Such as Barcelona and Inter Milan, as well as winning two Africa Cup of Nations titles.

A forward who would eventually win four African Footballer of the Year crowns made his debut in La Liga at the tender age of 16. A year younger than Diallo was when he took to the field in Serie A for the first time in October 2019.

“Guide him on one or two things. And he’ll improve and be one of the best players we’ve seen on the continent.”

Diallo made a total of four Serie A appearances – all as a substitute – for Atalanta. With one of those coming against Hellas Verona, the club that Badu left just over a month ago.

Although the 30-year-old Ghanaian is impressed by Diallo’s ability, he feels it is unfair to compare his arrival at Manchester United to one of the world’s greatest players – Portugal’s Cristiano Ronaldo.

The comparison has been made because both are wingers. Both joined United aged 18. And both arrived at Old Trafford with physiques that require strengthening for the rigours of the Premier League.

For Badu, the difference in the number of games played means such comparisons with the Juventus star are unfair.

“When Ronaldo was leaving Sporting Lisbon, he had played 25 (league) games for them. But Diallo at Atalanta didn’t get the chance to play many matches.” Badu explains.

“But they do have some things in common. Their age is similar, their pace – he’d take you one against one – . And he has an eye for goal. To compare them is too early for us. But going by what I have seen, he can be at that level very soon.”

Diallo, then called Amad Traore, scored on his debut for Atalanta against Udinese in October 2019

Once known as Amad Traore, Diallo is already showing his potential. Scoring twice in his first match for the United’s Under-23s as they beat Liverpool 6-3 on 30 January.

The Ivorian has already trained with the first team and United manager Ole Gunnar Solskjaer is happy with his progress.

“We will give him the time to settle in and show his skills.” Solskjaer said on Monday. “He does well in training, and has good close technique. He will open up defences. It won’t be too long before he is involved in the match-day squad.”

Diallo has been handed the number 19 shirt once worn by Marcus Rashford, who made his United debut at the age 18.