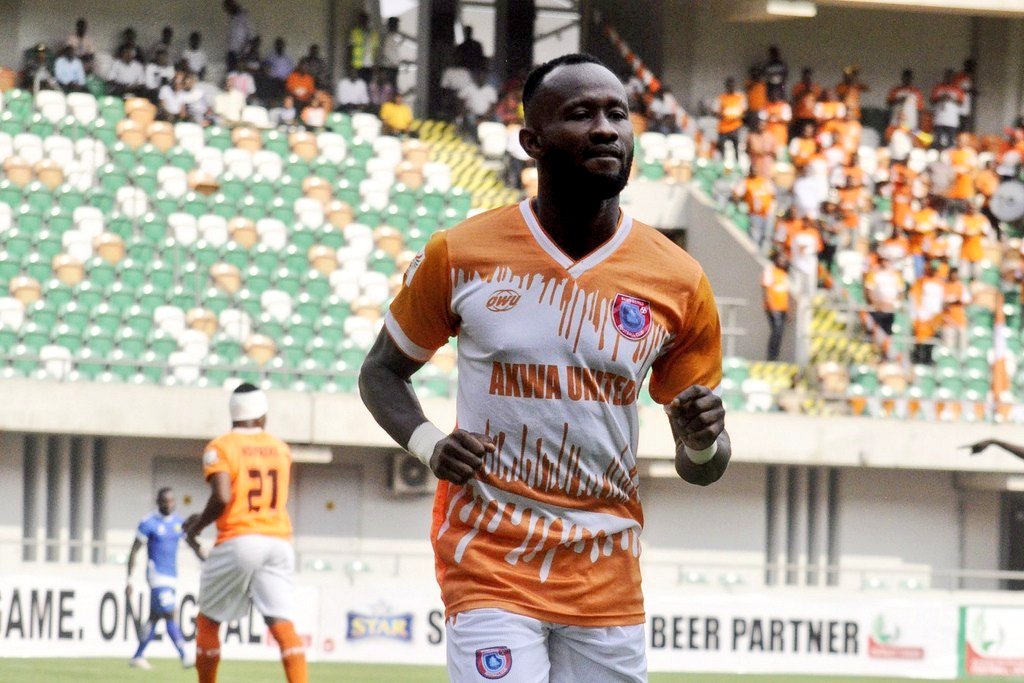 Udoh’s curling corner kick in the second half, flew above everyone in the crowded box and bounced into the bottom left corner of the post as the Promise Keepers picked their first away win.

Udoh’s goal against Heartland in Owerri on Matchday 6 of the NPFL edged him closer to Okpotu’s record.

Having helped his side to a well deserved win, saw him match Okpotu’s record and his next goal will make him the NPFL highest goalscorer.

The goal was Mfon Udoh’s second of the season after scoring his first in a 2-1 defeat to Heartland in Owerri on Matchday 6.

Despite enjoying a greater percentage of ball possession, the Promise Keepers were unable to break the defense of their hosts.

Both teams failed to find back of the net with Akwa United fluffing away their chances heading on several occasions.

Coach Boboye made two substitutions shortly before the commencement of the second half, David Philip and Amadi Samuel replaced Ubong Friday and Otobong Effiong.

But it was the hosts that missed the chance to go in front when they were awarded a free-kick in a promising position after a foul by Olisa Ndah but Silas Alfred’s attempt went off target.

The Promise Keepers’ attacking play opened up Adamawa United’s defence as Ndifreke Effiong did well to fend off a challenge before cutting it back to Mfon Udoh whose low strike was heading towards the bottom corner but the goalkeeper Victor Philemon was in his element to punch it out for a corner.

A second attempt at goal by Mfon Udoh within a space of four minutes was blocked out for a corner kick.

Mfon Udoh took the responsibility and delivered a spectacular curling corner kick which evaded everyone in the box to find its way into the back of the net in the 58th minute.

The result moves the Promise Keepers to 9th on the log with 12 points from eight games.

Akwa United will next entertain Katsina United on Match-day 9 at the Godswill Akpabio International Stadium, Nest of Champions on Monday February 8, 2021.