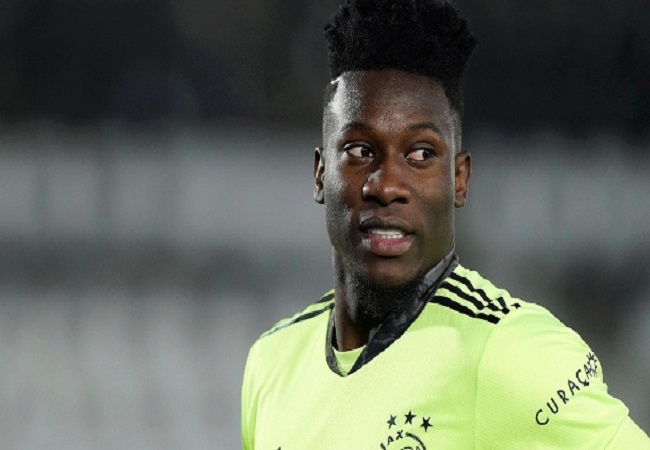 Ajax revealed UEFA has banned their goalkeeper Andre Onana after it found the forbidden substance Furosemide in his urine, following the test in October 2020. The doping suspension is effective from 5th February.  And it applies to all football activities.

The Cameroon international got a 12-month suspension for failing an out-of-competition doping test. His club however claims that their number one accidentally took medicine prescribed for his wife.

“On the morning of 30th October, Onana was feeling unwell. He wanted to take a pill to ease the discomfort. Unknowingly, however, he took Lasimac, a drug that his wife had previously been prescribed.” A statement on the Ajax website says.

“Onana’s confusion resulted in him mistakenly taking his wife’s medicine. Ultimately causing this measure UEFA took against the goalkeeper.

“Furthermore, the disciplinary body of the football association has stated that Onana had no intention of cheating. However, the European Football Association believes, on the basis of the applicable anti-doping rules, that an athlete has a duty at all times to ensure that no banned substances enter the body.” The statement continued.

The Dutch club, currently seven points clear at the top of the Eredivisie, confirmed they will appeal to the Court of Arbitration for Sport (CAS).

“We explicitly renounce performance-enhancing drugs. We obviously stand for a clean sport.

“This is a terrible setback, for Andre himself but certainly also for us as a club. Andre is a top goalkeeper, who has proven his worth for Ajax for years and is very popular with the fans.

“We had hoped for a conditional suspension or for a suspension much shorter than these 12 months. Because it was arguably not intended to strengthen his body and thus improve his performance.” Ajax managing director and former goalkeeper Edwin van der Sar said.

As it is, Onana rolls out of all football activities. Meaning he will not be available for Ajax’s domestic or European matches. Including their Europa League campaign this season. They face Lille in the last 32 later this month.

He will also be unavailable for Cameroon until February 2022. Including the Africa Cup of Nations – should they qualify – which the CAF has rescheduled to January next year. The final two games of their qualifying campaign are in March, away to Cape Verde and home to Rwanda.