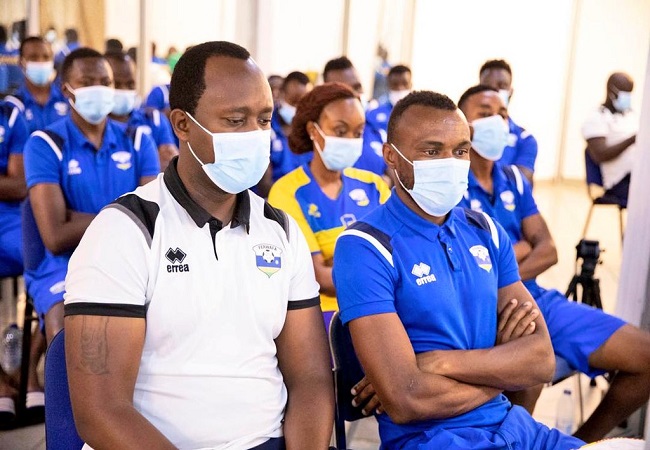 Rwanda national football team players and coaching staff will get huge bonuses. This is further the Amavubi’s impressive performance at the CHAN 2020 tournament in Cameroon according to Guy Didier Rurangayire, the Director of Sports in the Ministry of Sports.

Rurangayire said this during a press conference at the Ministry of Sports offices at Amahoro Stadium. But he refused to reveal the exact amount of money that the Rwandan delegation will get. He however acknowledged that it is the first time that players will receive such big bonuses.

“I cannot reveal how much money each player, coach or support staff got. Because we are not obliged to reveal such information. However the players are free to say how much they will get. But it is the first time, players in the national team will get such a bonus.” Rurangayire said.

However sources have revealed that Amavubi players will each pocket Rwf10m which includes a special bonus from President Paul Kagame that he promised to the players recently.

The first payment will come from the Ministry of Sports which is Rwf5m while it is reported that the President will give the same amount of money to the players.

The bonus is in appreciation of the players’ performance in the elite tournament when they reached the quarterfinal. This without good preparation which was largely due by the Covid-19 pandemic.

Meanwhile, Rurangayire said there is no guarantee that Coach Vincent Mashami will continue managing Amavubi.

“We will meet soon to evaluate his performance and decide on a way forward. It is not a guarantee that he will stay as Amavubi coach. Part of his contract included guiding the team to the African cup of nations. And that has not been determined yet.” He added.

Mashami took on the Amavubi job in August 2018 to replace Antoine Hey. He initially signed a deal of 18 months. Contract that got extention for a year in February 2020.

The contract runs out on Thursday, 11th February.

Mashami is the first Rwandan coach to lead the national football team to a quarterfinal of a major tournament. The last time Amavubi reached the quarterfinal of the CHAN tournament was in 2016. It was when the country hosted the competition with Johnny Mckinstry as head coach.