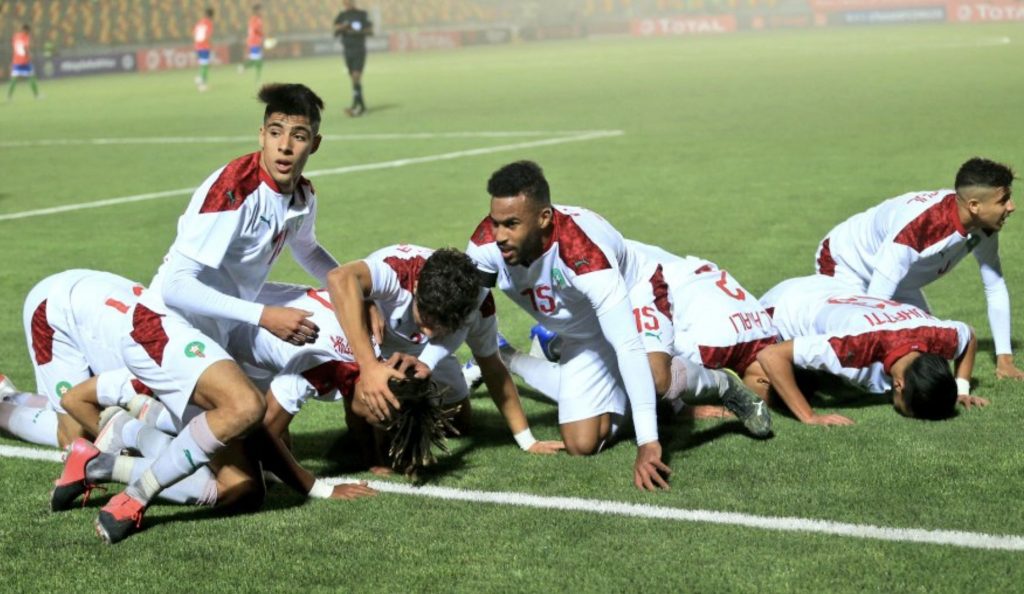 Young Atlas Lions of Morocco began their Group C campaign at the ongoing Total AFCON with a hard fought 1-0 win over a resilient Gambia.

It had been a balanced start to the match though Morocco were more direct in their approach.

Achraf Ramzy had the first sniff at goal for the North Africans with a volley inside the box off a corner that went just over.

Both team started the game brightly until Gambia defender Edrissa Ceesay was adjudged to have handled the ball inside the box.

Oussama Zemraoui stepped out to play the penalty but Gambia goalkeeper Lamin Saidy guessed well to save the penalty.

His heroic save didn’t count as the referee ordered a retake after the goalkeeper was adjudged to have come off his line early.

Then El Mehdi Maouhoub took matters in his hands and converted from the spot.

After conceding though, Gambia’s Baby Scorpions were more adventurous going forward and came close nine minutes to the break, but were denied by the Moroccan keeper Alaa Bellarouch.

The shot stopper spread his body nicely at the near post to block a shot from Alagie Saine after he had initially spilled the ball off a freekick.

The second half was closely contested with Gambia constantly trying to break the lines and progress to find goal scoring opportunities.

However, they could not pick the right passes and seldom had a shot on target.

In contrast, Morocco had two efforts come close with Mohammed Ammine’s freekick rolling over the bar while substitute Tawfik Bentayeb had another go just wide after curling beyond the wall.

Mamadou Bojang had a late effort for the Gambians when he was sent through on goal after some good link up play, but he was flagged offside as he went to pull the trigger.

In a tight and cagy match with few and far in between chances, it was the North Africans who would walk off with victory and move second in the standings behind Ghana who thrashed debutants Tanzania 4-0 on the opening match earlier on.

Morocco next game will be against the free scoring Ghana Satellites while Gambia wi tackle debutants Tanzania on Friday.