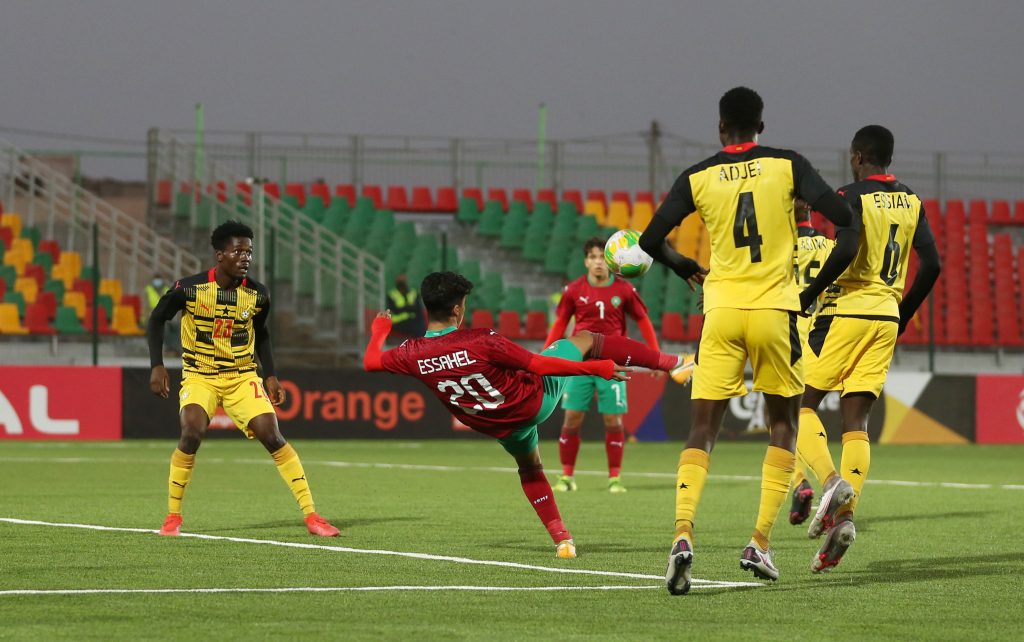 Ghana and Morocco settled for a barren draw in the second Group C game at the Total U20 Africa Cup of Nations in Nouadhibou on Friday.

Both teams buoyed from their opening games wanted struggled to get an early  ticket to the knockout stage.

However, they sized themselves in a thrilling and entertaining match which saw both sides had chances to score, but couldn’t find the net.

The result sees both teams move to four points, but Ghana remains top of the group on goal difference having beaten Tanzania 4-o in their opening encounter while Morocco were 1-0 winners over Gambia.

Ayoub Mouloua made a brilliant mazy run on the left before storming into the box and turning to his favourite right boot but his final shot attracted a good save from keeper Danlad Ibrahim.

Mohammed Amine Essahel picked up the rebound and tried his luck with an acrobatic bicycle kick which rolled on top of the crossbar.

Morocco had been the most enterprising upfront in the opening minutes of the match and they had another opportunity in the 22nd minute with Tawfik Bentayeb’s well angled header off a freekick from the right going just wide.

The Black Satellites had to wait until the 36th minute before getting their first real shot on target.

Percious Boah who struck a brace in the opening day 4-0 win over Tanzania attempted to stretch his tally with a ferocious freekick from 35 yards out but keeper Alaa Bellaarouch smothered the ball behind for a corner.

On the other end, Bentayeb came close again for the young Atlas Lions with a left footed shot which went just over after Essahel pinched the ball off the Ghanaian backline to put him through on the right.

The contest continued to be well balanced and weighted from both ends and two minutes to the break, the Black Satellites had a chance that should have had better execution.

Mohamed Sulemana delivered an inviting cross from the right, but Joselpho Barnes couldn’t muster his effort on the volley, the chance going way over.

The tempo was the same in the second half with Morocco faster off the blocks.

Bentayeb had a snap shot from close range go over after a cross from the right was deflected to his path while two minutes later, Achraf Ramzi had a long range effort go just over.

On the other end, Ghana had a chance after 67 minutes but Sulemana had a dipping shot go just over after being teed up by Samuel Abbey-Ashiye.

The two sides kept teasing each other in attack but nothing could separate them. In the final five minutes, bothsides made attacking changes, Mohamed Ayman Ouhatti and Oussama Raoui coming off for Oussama Zemraoui and Omar El Hilali respectively.

Ghana responded by bringing in Samson Agyapong for the fatigued Abdul Fatawu.

Nonetheless, none of the two sides could break the deadlock.

The Moroccans had a late chance in added time with Haitam Abaida curling a freekick beyond the wall, but Ghana keeper Ibrahim made a clean save.

Both teams now have four points with Ghana leading the group on goal difference.

Ghana will next face Gambia while Morocco tackle Tanzania with the matches set to decide the final ranking of the group.