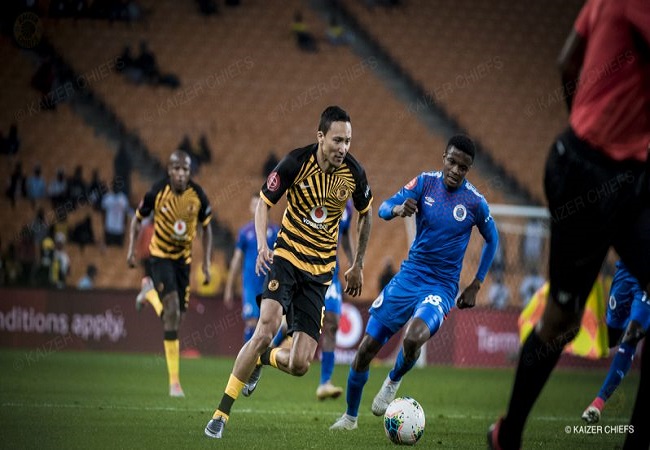 Kaizer Chiefs extended their winless run to six matches in all competitions after they were held to a 1-all draw by SuperSport United in the DStv Premiership at a hot FNB Stadium on Saturday afternoon.

This result ensured that Chiefs climbed to eighth on the standings with 19 points, 13 behind SuperSport who are second. Chiefs, though, will feel hard-done by the result. Given that they were the better side and conceded from a penalty.

But heading to Tuesday’s Caf Champions League group stage match at home against Horoya Athletic Club, Chiefs could be served with a huge morale booster. Should Wydad Casablanca fail to find a venue for the postponed match by today, they’ll forfeit the match and Chiefs will get a 2-0 win.

After three defeats in a row – twice in the league and Nedbank Cup – it had taken a while since Kaizer Chiefs looked this good. So much that they went into the interval having dominated possession and a goal up through Reeve Frosler’s wonder strike.

But perhaps credit should go to coach Gavin Hunt for adopting a different approach compared to the previous matches. He started with two strikers up front, Leonardo Castro returning to the starting line-up to partner Samir Nurkovic.

The return of Willard Katsande, in the engine room for Daniel Cardoso who’s originally a centre-back, also brought stability to Chiefs. And that is why they were fluid in attack. But they were deprived of the early breakthrough by a firm SuperSport defence.

Castro nearly pounced for Chiefs after benefitting from a ball that bounced against Nurkovic. But Bongani Khumalo made an exceptional clearance in front of goal. Soon thereafter, on the other end, Frosler also cleared Evans Rusike’s head on the goal mouth.

But Chiefs ensured that their efforts paid dividends on the stroke of the half-an-hour mark. Bradley Grobler’s header cleared SuperSport’s corner-kick as far away as Frosler who was lurking on the far-post outside the box.

The Chiefs’ defender parried the ball back to Grobler who failed to control before the former won the loose-ball again. Frosler, with acres of space to himself, picked up his spot and curled the ball to the far-post where it came off the underside of the bar and rattled the net.

Both teams, thereafter, took shots from distance. But Grobler and Nkosingiphile Ngcobo’s attempts were comfortably saved by Itumeleng Khune and Ronwen Williams respectively. Khune made another save to ensure his team went into the break in the driving seat.

Ghampani Lungu sent a beautiful delivery down the flank which Rusike intercepted with a curling head. But Khune exceptionally tipped the effort over the crossbar. That was a good reaction from Khune after the midweek blunder that cost his team three points against AmaZulu.

From good to better. Khune made two crucial saves in the second half, blocking a close-range range from Kudakwashe Mahachi before parrying away Sipho Mbule’s long-range, low and hard shot for a corner-kick.

SuperSport found their breakthrough, though, through Grobler who scored his 13th league goal from the spot. Chiefs continued to push for the winner but Anthony Agay, who had conceded the penalty for his team. And Ngcobo saw their efforts saved by Williams respectively.