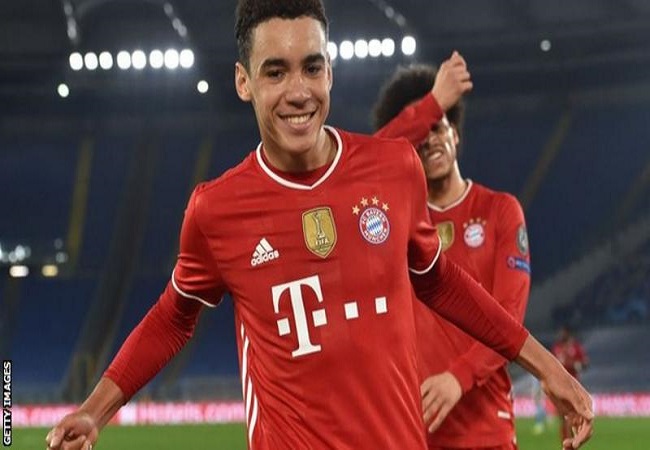 Jamal Musiala enjoyed a dream early 18th birthday present when he scored his first Champions League goal for Bayern Munich. It was against Lazio at the Stadio Olimpico (Roma) on Tuesday night.

The 17-year-old forward, who celebrates his birthday on Friday, finished smartly from outside the box. As the holders beat Lazio 4-1 in Rome to take control of the last-16 tie.

Making his second Champions League start this season, German-born attacking midfielder of Nigerian descent Jamal Musiala set a new record for a German club when he found the net in the 24th minute.

Aged 17 years and 363 days, he is now the youngest player to ever score a goal for a German club in the Champions League, according to the statisticians at OPTA.

Musiala netted with a right-footed shot from outside the box to the bottom left corner to double Bayern’s advantage, with Leon Goretzka providing the assist.

The German champions took the game by the scruff of the neck very early on. Robert Lewandowski pouncing on an error from a Lazio defender to give Hans-Dieter Flick’s side the lead after eight minutes.

Leroy Sane made it three three minutes before half-time. An own goal from Francesco Acerbi in the 47th minute made it worse for Lazio before Joaquin Correa got one back in the 49th minute in an improved second half display by the Italians.

Musiala is also Bayern Munich’s youngest player to debut in the German Bundesliga at 17 years and 115 days. And he is their all-time youngest goalscorer aged 17 years and 205 days after finding the net on the opening day of the 2020-2021 season.