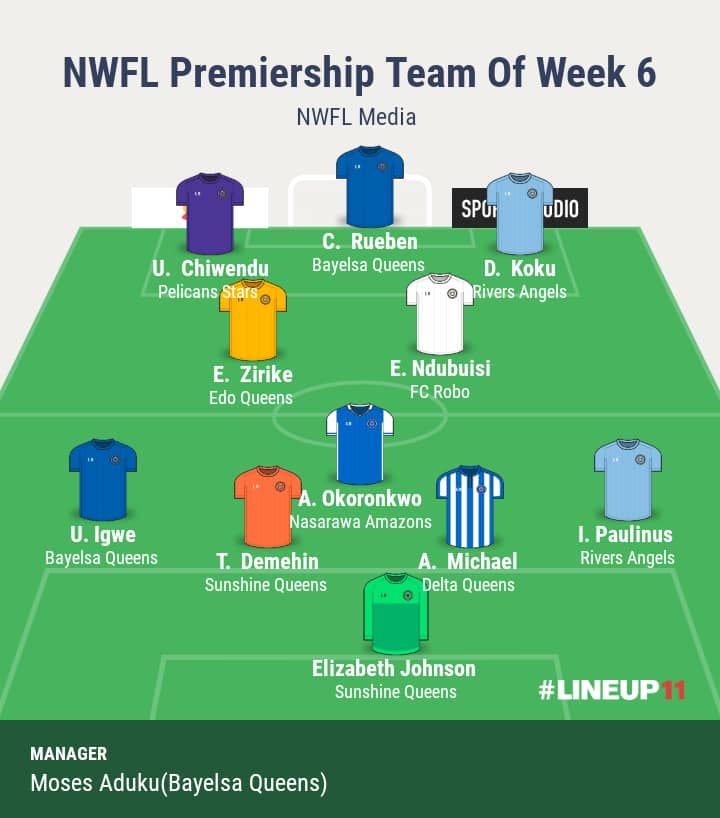 After an impressive performance at the back to help Delta Queens contain Confluence Queens, Angela Michael made it to the Nigeriw Women Football League (NWFL) Premiership team of the week.

Delta Queens got their first point on the road following a goalless draw in Lokoja on week 6 of the NWFL Premiership.

Michael’s solidity at the back didn’t go unnoticed as she was included in the team of the week with Bayelsa Queens coach Moses Aduku as manager of the week.

Here are the best eleven players of week  6 as released by the NWFL.

The big goalkeepeer recorded her second consecutive clean sheet and was impressive against Ibom Angels lastweek in Akure.

The ‘Betty babes’ custodian made a number of excellent saves to deny Ibom Angels from scoring.

She was fantastic against a very determined Osun Babes side, who had their eyes on picking at least a point in Porthacourt.

She helped in coordinating the defence alongside Ugo Njoku and was one of the best player on the pitch.

Always outstanding in the colours of Bayelsa Queens. The defender has great qualities that makes her unique.

She had a very busy day, trying to contain fast and energetic winger Taibat Odueke.

String and reliable at her defensive Midfield position, the Super Falcons Midfielder was everywhere on the pitch against Abia Angels and was influential to her side’s hard-fought victory.

Micheal Angela was solid at the heart of Delta Queens defence and stopped alot of attack flow from Confluence Queens, who were playing at home and needed to win.

Delta Queens earned a point away from home and Micheal Angela was one of the reasons for that.

Demehin was superb again for her side, as they picked maximum points against struggling Ibom Angels. She was there to stop Ayo Omosuyi and Blessing Nkor.

Damilola Koku was not only key in setting up attacking chances for Rivers Angels against her former side, Osun Babes. The workhalolic forward scored the winning goal to give her side the maximum point.

The in-form striker came off the bench to score twice for the ‘Restoration Ladies’. The former Ibom Angels forward was simply a class above others and proved that with two goals to her name.

The young Midfielder was superb at the Midfield, as the Lagos Landladies beat Royal Queens comfortably at the National Stadium, Lagos.

She earned her spot this week because of her high work rate and talismanic display in the heart of FC Robo Queens midfield.

Chiwendu is the first Pelican Stars player to get a spot in the team of the week.

The diminutive forward scored the only goal of the game, as her side recorded their first win of the season.