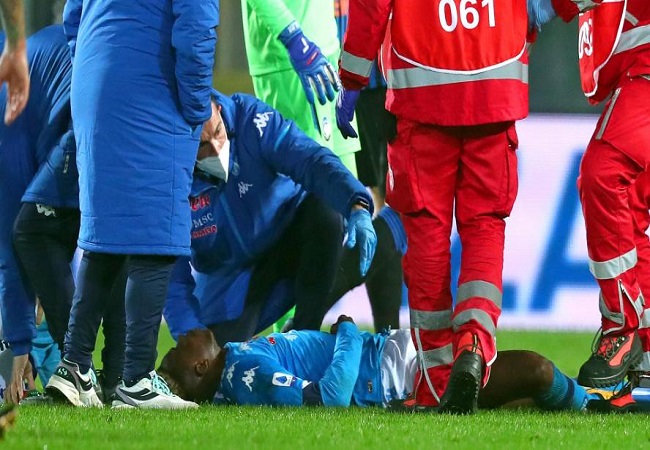 Super Eagles’ head coach Gernot Rohr is hoping Napoli forward Victor Osimhen will be fit enough to feature for his side in the 2022 Africa Cup of Nations qualifiers.

The West Africans will take on the Republic of Benin on 27th March. And they will play Lesotho three days later in Lagos which would decide the fate of the Super Eagles.

Nigeria currently lead the Group L table with eight points. And a loss in both games could end their hopes of qualifying for the continental tournament in Cameroon.

The German tactician is set to name Osimhen in his team for such crucial games. But his fitness has called for concern.

The 22-year-old suffered head trauma after landing awkwardly on the turf following a collision with Cristian Romero in his side’s defeat to Atalanta in Sunday’s Serie A game.

The centre-forward was subsequently rushed to the hospital. And he spent the night there, where he was subjected to numerous tests.

Osimhen has now been cleared of any head damage. But he has been advised to rest before returning to action.

Rohr revealed he has reached out to the centre-forward. He who has bagged four goals in the qualifiers and assured of his health.

“I spoke to Victor. He told me he’s physically and mentally okay now but must wait for the club doctors.” Rohr said, as per BBC Sport.

“My thoughts are with him. Because he’s had some difficult start in Italy. But he’s a strong boy. And he must wait for the doctors to clear him to play again.

“He’s an important player for us. And we’ll see how it goes at his club first. Because his well-being is very important for everyone.”

Osimhen has been playing a key role for the Super Eagles since Odion Ighalo retired from international football in 2019. It was after helping the West African side to finish third at the Africa Cup of Nations in Egypt.

The Napoli attacker has bagged five goals in 10 appearances since making his debut for the three-time African champions in 2017 against Togo.

Osimhen has scored two goals. And he provided one assist in 16 appearances since he joined the Parthenopean last summer from Lille.

The forward could miss his side’s Serie A game against Benevento on Sunday. But he could make his return against Sassuolo on 3rd March.