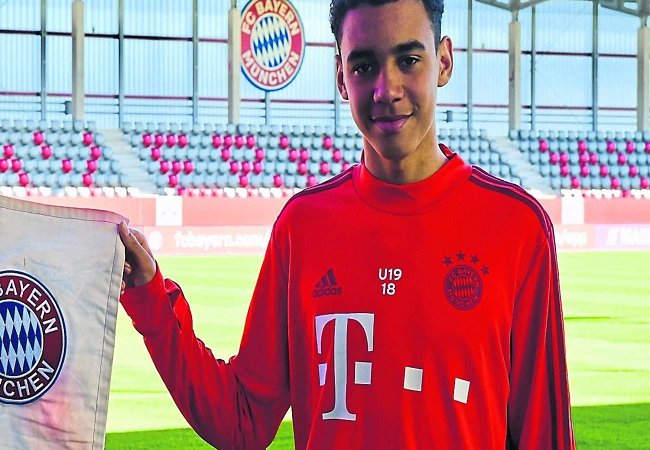 Musiala was born in Stuttgart to a German mother and Nigerian father. But he grew up in England. Making him eligible to represent Germany and England internationally, as well as the Super Eagles theoretically.

Many signs point to the fact that Germany are in pole position for his services with manager Joachim Löw planning to hand him a maiden call-up for next month’s international fixtures. Though he is provisionally cap-tied to England, having made his competitive debut for the Young Lions last November.

Musiala has been making waves since breaking into Bayern Munich’s first team. And he enhanced his growing reputation by scoring his first Champions League goal on Tuesday.

Crouch and Hargreaves are urging Three Lions boss Gareth Southgate to fast-track him into the England squad ahead of next month’s game against San Marino, Albania and Poland.

“Bayern have world-class players in every position so for him to come in and play is truly remarkable.

“He is a special player, can play off either wing and is best as a number 10 – really athletic, looking to run at defenders. He has great composure, absolutely fabulous. And I am delighted he started.

“For special players you make special decision. I would love to see him in an England shirt. But it shows what level he is at if countries like England and Germany are competing for him at 17 years old.” Hargreaves said Speaking on BT Sport (via BBC Sport) after yesterday’s game at the Olimpico di Roma.

“I believe Gareth should pick him. We don’t want him going to play for Germany. You don’t know his mindset. He will have Germany people in his ears. But why don’t you cap him?” Added Crouch.

Musiala attended Whitgift School in Croydon. The same school that produced ex-England U17 sensation Victor Moses, who later pledged his international future to Nigeria and won the 2013 Africa Cup of Nations with the Super Eagles.