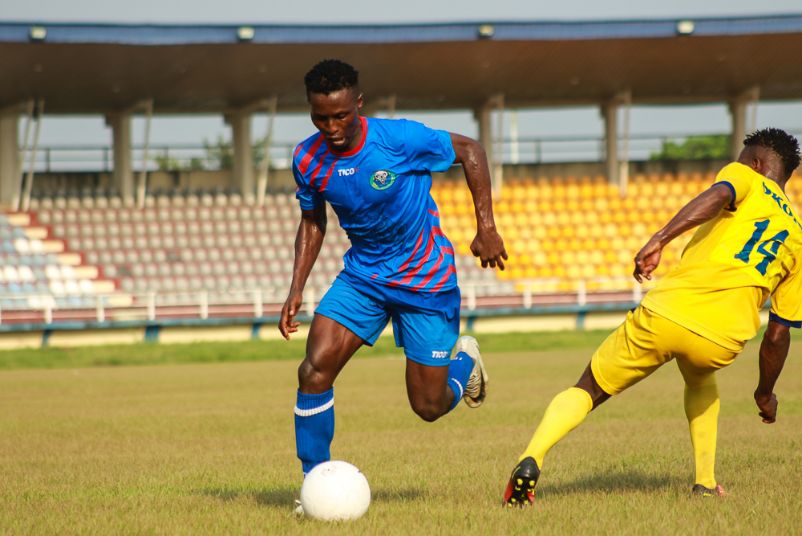 Warri Wolves new boy, Emeka Udoh was the hero for his team as his solitary goal helped his team to victory against Rivers United.
Udoh who was making his home debut decided to seize the opportunity to shine like  thousand sand.
Udoh’s home debut for Warri Wolves got off to a good start, as it took just 50 seconds after coming from the bench to score  for Warri Wolves.
The power playing striker scored with his first touch on the ball for the Seasiders in their 1 – 0 victory over Rivers United at the Delta State Polytechnic Stadium in Ozoro on Matchday 12 of the 2020/2021 Nigeria Professional Football League, NPFL, campaign on Wednesday, February 24, 2021.

Udoh chased a lose ball that had bounced over Rivers United’s Kazia Enyinnaya and sent fly a very powerful shot beyond the outstretched hands of Theophilus Afelokhai to put the home team in the lead in the 67th minutes of the keenly contested tie.
It was the first time Warri Wolves were scoring against Rivers United and picking three points against them in the top flight, since the Seasiders returned to the NPFL in the 2019/2020 season.
Earlier on, it was the home side who enjoyed better spell of ball possession, but it was Rivers United who looked more threatening on the break.
The Rivers United defence line marshalled by Festus Austin thwarted every move by Warri Wolves to have a sight of goal.
The home side were restricted to taking feeble attempts from afar by the visitors.
But the 67th minute goal did not weaken the resolve of the visitors to look an equalizer.
Rivers United threw more men forward and attacking the Warri Wolves back four relentlessly.
Warri Wolves, however, held their ground and ensured it finished 1 – 0 in their favour.
Speaking after the game, technical adviser of Warri Wolves, Evans Ogenyi, described the game as very physical fixture.
“I knew quite well that I’m going to play a very tactical side,” he said.
“The team just came out of the the continent.
“And I knew they would come so much anger.
“It was very physical game.”
“I told my boys about this fact.”
“I’m happy that my team came back to winning ways against them.”
“We needed this win to bounce back.”
He maintained that preparations for their next game in the NPFL have begun in earnest.
Warri Wolves will play Kwara United on Matchday 13 in Ilorin.