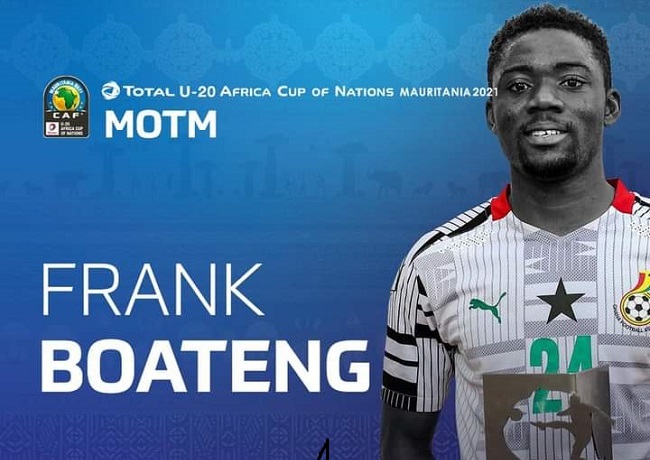 Ghana won against Cameroon in the quarterfinals of the 2021 Africa U20 Cup of Nations. And Ghanaian forward Frank Boateng was named as the Most Valuable Player (MVP) in the game.

Ghana emerged 4-2 winners during the penalty shoot outs after the game ended 1-1 after 120 minutes of football.

Boateng came from the bench in the 58th minute and showed resilience in upfront for Coach Karim Zito’s side.

The Prestige FC attacker also got the equalizer for Ghana just a minute after the Cameroonians took the lead in the 103rd minute of the game.

After receiving his award, the midfielder was elated with how he’s announced his presence in the competition.

He praised his teammates for their mental toughness. And he thanked Coach Karim Zito for prepping him before he was introduced into the game.

“Our dream of winning the competition remains intact. And we are determined to win just as wedid in Benin.” He continued.

“Again we have shown that once again that we are good whenit comes to penalties. Now we are motivated going into the next game.” He added.

Ghana will face the winner of the game between Gambia and Central Africa Republic on Monday for a place in the final match which will be played next weekend.