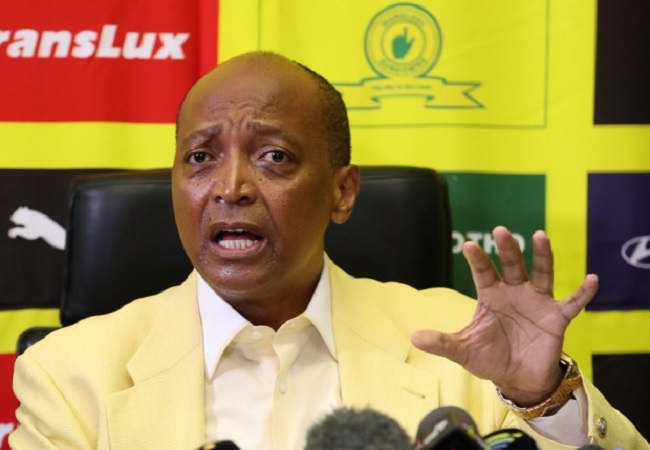 Patrice Motsepe said the President of Mamelodi Sundowns would “retire” for the duration of his Caf presidency should he win the most votes of the 54 African football association heads at the continental body’s elective congress in Rabat‚ Morocco in two weeks’ time.

He said his wife‚ Precious Moloi-Motsepe‚ and other two sons‚ Kgosi and Kabelo‚ will have a role to play supporting Tlhopie Motsepe as head of Sundowns.

Less is widely known about Thlopie as the Motsepe family have pointedly kept their family affairs out of public spotlight. His full name is Thlopane‚ the same as the middle name of Patrice Motsepe.

“Let me talk quickly about the question about ‘Sundowns losing me’. Sundowns will never lose me.” Motsepe said‚ answering questions at the launch of his 10-point action plan to revive Caf at Sandton Convention Centre.

“ … If I’m honoured and privileged and elected I will have to step aside [at Sundowns]. Because you can’t have a president who has to introduce all of these fundamental changes … And then I sit there and Sundowns are playing the Champions League final. And the referee makes funny decisions, and they say‚ ‘You see’.

“So I’ve got to step away. And so‚ in our culture my son [Tlhopie Motsepe] is going to be – you know‚ you don’t want to pre-empt the thing. – But he’s going to be the new chairman. … And his mother will be there. And his brothers will be there.

“So the jersey of president will be retired until there’s a new president at Caf. In which case I will come back.”

Motsepe added: “Dr Rejoice will be the deputy chairman‚ and will be there to back up my son with all of the people there like Yogesh [Singh‚ Downs’ general manager]. And of course the key person for me from a family perspective is my wife. Because she has the unique love and also guidance.”

Simelane’s profile on the website of African Rainbow Minerals states that she “began her career at the University of Swaziland as a lecturer in economics. Between 1998 and 2001‚ she worked at the Department of Trade and Industry as well as National Treasury”.

She also was “a special economics advisor to the premier of Mpumalanga until 2004‚ when she was appointed chief executive of Ubuntu-Botho Investments‚ a position she held until 2016”.

She served as “a member of the presidential economic advisory panel under president [Thabo] Mbeki until 2009 and served on the board of the Council for Medical Schemes from 2008 to 2011.”

Sundowns’ media staff‚ reached in Tanzania where the club will meet Algeria’s CR Belouizdad in a Caf Champions League match on Sunday‚ confirmed Thlopie Motsepe‚ not Kgosi‚ as some media reports stated‚ was the son Patrice Motsepe was referring to at Thursday’s press conference.