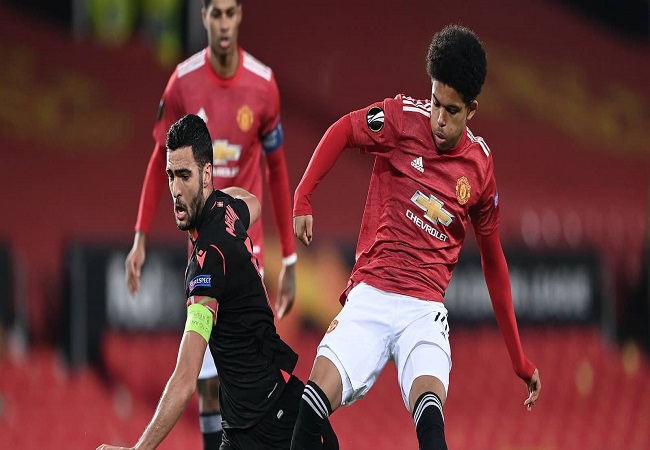 Manchester United beat their Spanish opponents Real Sociedad 4-0 on aggregate to secure a place in the last sixteen of the UEFA Europa League. The second leg game at Old Trafford ended goalless.

But the Red Devils had chances to win the game. Portugal star Bruno Fernandes hit the woodwork while Anthony Martial and Daniel James were denied by goalkeeper Alex Remiro.

Though the second leg was more or less a formality, Mikel Oyarzabal would have given the Spaniards a lift if he had converted a penalty kick with thirteen minutes played.

Some of the talk leading up to the second leg clash was about Shola Shoretire. He has broken Norman Whiteside’s record of being the youngest player to feature for Manchester United in European competition.

Aged 17 years and 23 days, the Nigeria-eligible winger entered the game as a substitute in the 76th minute. He replaced Mason Greenwood setting thus a new club record in the process.

Whiteside, the youngest player to feature in the FIFA World Cup, was 17 years and 131 days. It was when he made his European debut against Valencia in the UEFA Cup at Old Trafford thirty nine years ago.

Shoretire has two other club records to his name. Has was the youngest player to debut in the UEFA Youth League sporting the highest squad number (74) ever won by a Manchester United player in a competitive men’s first-team fixture.