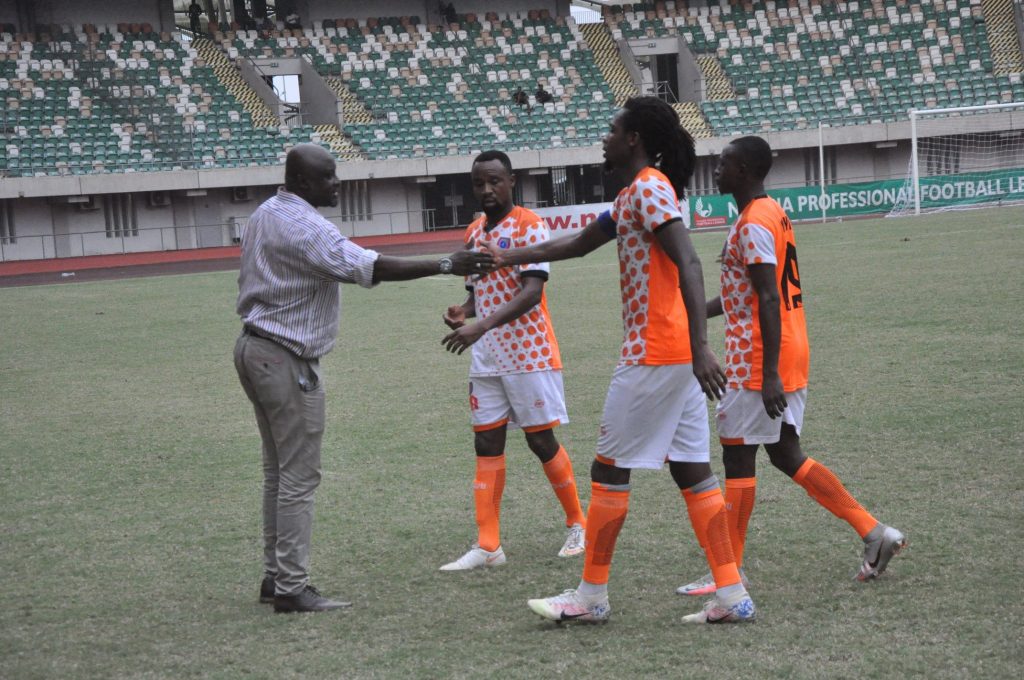 It was a weekend filled with exhilarating action as the 2020/2021 Nigeria Professional Football League (NPFL) season entered Matchday 13.
Nine games were played on Sunday with the remaining game to wrap up the week on Monday.
No away team was able to pick a win but we saw three games ended goalless.
MFM FC 1-0 win against Nasarawa United at the Agege Stadium on Monday means 17 goals was scored in Matchday 13.
The shocker of the week was Adamawa United who shared the spoil with Sunshine Stars in Akure.

While Dakkada FC came back from two goals down to record their first win over Kano Pillars in the NPFL.
At the Nest of Champions, Akwa United submerged Rivers United 3-0 to continue their resurgence.
Goals from Mfon Udoh, Charles Atshimene and Morice Chukwu was enough to hand hand Kennedy Boboye a pleasant birthday gift.
In the Oriental derby of the week, Enugu Rangers defeated Heartland FC 2-0 at the Cathedral and moved to third position on the league table.
Two goals in the first half by Isaac Loute in the 9th minute and  Godspower Aniefiok added time before the break gave the Flying Antelopes the maximum points.
Abia Warriors return to  Okigwe stadium has remained their turning point after a poor start to the season while using the Enyimba Stadium, Aba as their home ground.
They defeated Wikki Tourists 1-0 to remain unbeaten in their last three matches and moved to 12 place.
Lobi Stars picked a vital 2-1 victory at the Aper Aku Stadium against Katsina United.
A Mathias Samuel’s long range shot beat Katsina United goalkeeper to hand Lobi the victory after Rasheed Ahmed cancelled Chinonso Okonkwo 45th opener for the host.
Kwara United tamed 10-men Warri Wolves 2-0 at the Illorin Township Stadium.
Goals from Stephen Jude in the early minutes of the first half and a 56th minute goal by Michael Ohanu was all the Afonja Warriors needed to get the points.
The Seasiders were reduced to 10-men after Innocent Orukpe was handed a second booking in the 82nd minute.
At the Agege Stadium, MFM FC booked their second home win with a 1-0 win against Nasarawa United.
A 52nd minute goal by Elijah Akanni handed the Olukoya Boys their fifth victory against Nasarawa United.

How the Table look 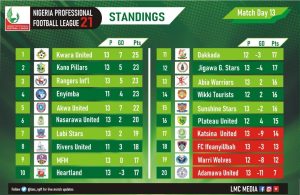