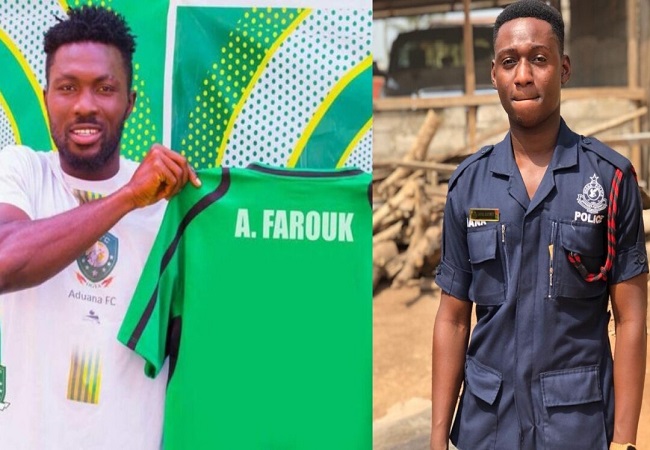 Aduana Stars defender, Farouk Adams, has been arrested for allegedly knocking and killing a police officer. In a report YEN.com.gh sighted on Myjoyonline.com, the sad incident happened on Monday, 1st March 2021 between Asuotiano and Asuhyiae in the Dormaa East District of the Bono Region. Per the report, the officer, Constable Amos Mattey of the Wamfie Police station, was alleged to have left his duty post to purchase something. But he never returned until he was found dead Tuesday morning in what appears to be a hit-and-run by a Red Toyota Camry with registration number GW 5882-17, which Aduana Stars’ central defender drives.

According to the report, the player alleges he knocked down a suspected animal that crossed the car upon which he stopped. But he found nothing. The report said he alleges he later parked the car at a nearby fuel station where he called the car owner about the accident and proceeded to the Wamfie Polyclinic to attend to the injury he sustained.

He reportedly later went back to the accident scene with the car owner but again found nothing. He then left for Dormaa in a different vehicle while a mechanic moved the other car to Sunyani on the orders of the actual owner, the source said.

Farouk alleged it was his friend who later told him the incident had caused the death of one person. He then reported it to the Dormaa Police station about 1:30 pm Tuesday and was subsequently arrested by the Wamfie Police. A police source said they had information of an accident victim only to find the lifeless body of Constable Mattey by the road at the scene.

The football star is currently in police custody.