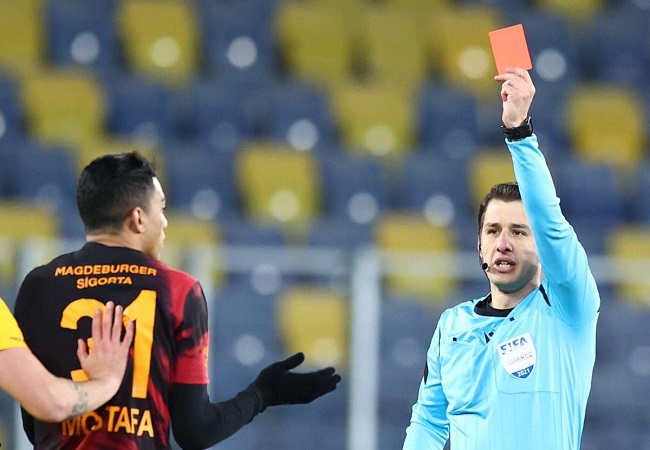 Galatasaray lost 2-1 against bottom-placed Ankaragücü in Super Lig game. And Egypt international, Mosatafa Mohamed, was sent off during during the game. This defeat put an end to ending Galatasaray’s nine-game winning streak.

Since joining Galatasaray on loan from Zamalek, the 23-year-old managed to score six goals in his six opening games. And he has now marked his second match without a goal.

It took the hosts 45 minutes to open the scoring, when Ibrahim Akdag found the back of the net from the penalty spot.

Desperate to come back, Galatasaray manager Fatih Terim decided to put on Radamel Falcao at the start of the second-half for Arda Turan, playing with two strikers.

Ankaragücü doubled the scoring just ten minutes into the second-half. Georgia international Saba Lobzhanidze brilliantly dirbbled past the Galatasaray defense before chipping it over the goalkeeper.

In the 57th minute Mostafa Mohamed hit his opponent in his face with the elbow. He was trying to protect the ball and was given a direct red card.

Afterwards, Galatasaray got their fair share of chances. And they were finally rewarded when Muhammed Aktürkoğlu scored their only goal of the game in the dying moments.

This defeat marked their first loss since losing 2-0 to Besiktas back in January.

They will hope to return to winning ways when they host Sivasspor next Sunday. The game will obviously play without the suspended Mostafa Mohamed.