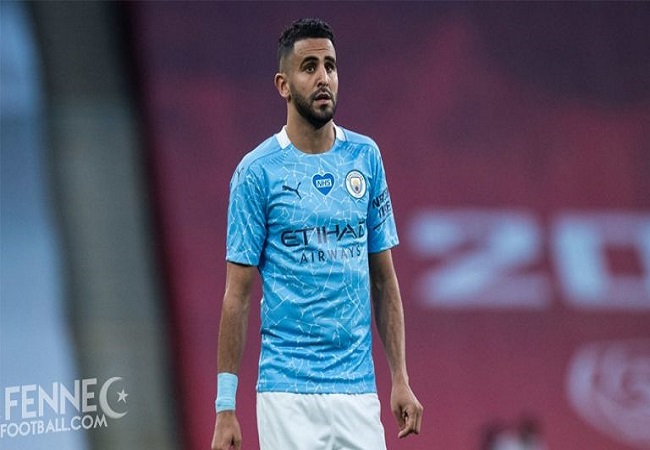 Algerian winger Riyad Marhez has missed out on the shortlist for the Premier League Player of the Month award for February.

Mahrez has been in good form for leaders Manchester City scoring and providing assists.

However, he has not made the shortlist for the eight players earmarked for the February 2021’s EA SPORTS Player of the Month award.

“Pick your favourite by voting from the shortlist below on the EA SPORTS website before 18:00 GMT on Monday 8 March.

“The votes from the public will be combined with those of the 20 club captains and a panel of football experts to decide the winner, who will be revealed next week.

“The votes from the public will be combined with those of the 20 club captains and a panel of football experts to decide the winner, who will be revealed next week,” Premier League website says.

Fulham’s centre-back and captain was pivotal as they kept four clean sheets in six matches and conceded only three goals. He also assisted Ola Aina’s goal at Burnley.

The winger scored in Leicester City’s 3-1 victory over Liverpool before getting a goal and an assist to inspire a 2-1 success at Aston Villa. He helped the Foxes win three of their first four matches in the month.

Cancelo has been instrumental in Manchester City’s winning run, converting from right-back to a midfield playmaker. Victories over Liverpool and Tottenham Hotspur were among his five in February.

Gundogan recovered from a penalty miss to score twice in the 4-1 triumph at Anfield, while also getting two goals against Spurs and setting up Raheem Sterling‘s effort at Burnley.

Lingard enjoyed a dream start to his loan spell at West Ham United, scoring twice on his debut against Villa, providing assists versus Sheffield United and Man City and scoring with a sweeping finish to secure a win over Spurs.

The Portuguese midfielder netted three goals and claimed an assist. He scored and set one up in a comeback win at Southampton and was on target against Arsenal and Newcastle.

Leeds United‘s Brazilian winger scored a superb free-kick against Southampton and found the net versus Everton. He also teed up Pascal Struijk’s goal at Arsenal as he produced a series of fine displays.