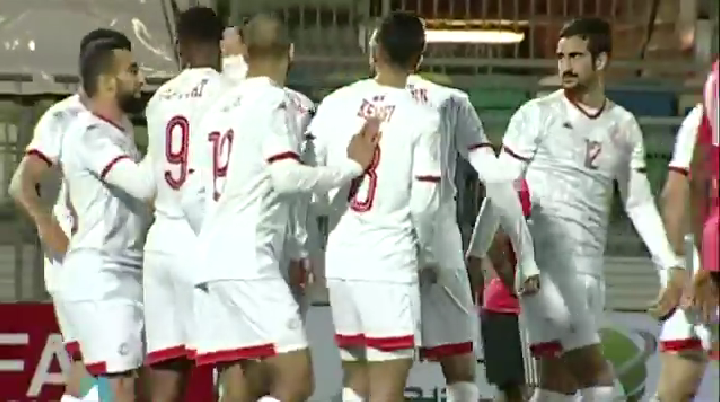 Libya hope of reaching the 2021 African Cup of Nations in Cameroon hit the rock as Tunisia fought back to a 5-2 win at the Martyrs of Benina Stadium.
Tunisia having already booked their place to the AFCON 2021 since Matchday 4 of the qualifier, ensured they maintain their unbeaten run.
The Mediterranean Knights were hoping to their country to cheer about especially in a period when it seems peace is gradually coming.
It was the first time they were playing at their soil after almost seven years.

It seems as things were looking when Muad Ellafi put the most in front but Tunisia will not relent as they responded through Yassine Meriah as the first half ended 1-1.
The Carthage Eagles were the better side in the second half and their effort was crowned with second goal.
Substitute, Seifeddine Jaziri would score a double in the second half with Mohamed Drager and Anis Slimane scoring one a piece to turn the tide on it’s head.

Libya looked to crumble in the second half and three minutes in, they were 2-1 down when Jaziri headed home from inside the box barely two minutes after coming on.

In the 50th minute, they were 3-1 up when Drager slid the ball through the keeper’s legs after a quick counter which saw Saif Edine Khaoui set him up.

The Libyans responded four minutes later when Ellafi scored his second with a calm lob over the keeper after controlling a cross from the left on his chest.

The home side smelt a comeback and hoped to get themselves back into the game. Motassem Masoud had a header saved by Ben Mustapha while Muatez Husayn also saw his shot from distance turned behind by the keeper.

With those misses, they were punished with Slimane’s well taken shot from distance making it four before Jaziri completed his brace in added time.