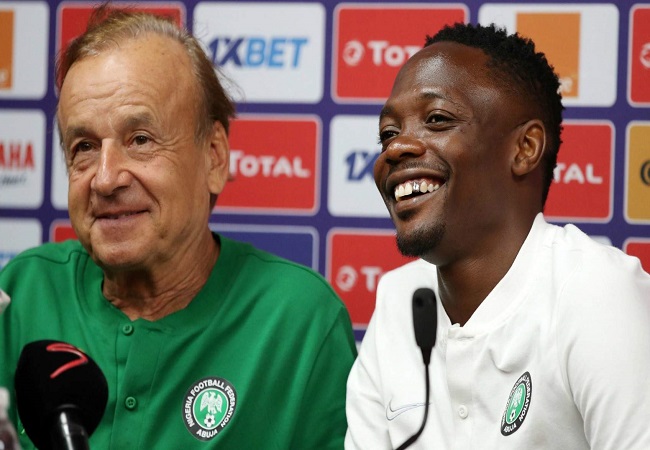 Nigeria qualified for Cameroon 2022 Afcon topping group L after defeating Lesotho 3-0 on Tuesday. Ahmed Musa was part of the team that played in the game for this victory.

Though without club since six months, coach Gernot Rohr has explained the rationale behind his decision to hand him.

Musa being named in the 24-man squad list for last month’s games generated controversy. Because he has been inactive at club level since October 2020 after mutually terminating contract with Al-Nassr in Saudi Arabia.

The 2013 Africa Cup of Nations winner made the matchday 23 against the Republic of Benin on March 27 because Alex Iwobi did not receive medical clearance to play the game. And three days later three players failed a fitness test before the squad headed to the stadium.

Rohr revealed that Musa was eventually given minutes against the Crocodiles because the squad was short of numbers. He was in good physical condition and wanted him to put himself in the shop window ahead of a potential move in the summer.

“We’re missing so many wingers, Kalu, Simon Moses, Iwobi in the first game and Musa not playing in the club. But finally Musa could play because we had only 21 players and with Musa 22.” Rohr explained.

“He could come in, he was there, he was fit. We made the physical tests, Musa is in good fitness. There was no reason not to allow him to come in. He’s the captain of the team and he finished captain on the pitch.

“We also want to help him to find a good club now“.

If the friendly against Togo (June 1, 2017) which is not recognized by FIFA is included, Musa is now six games away from becoming Nigeria’s most capped player in history.