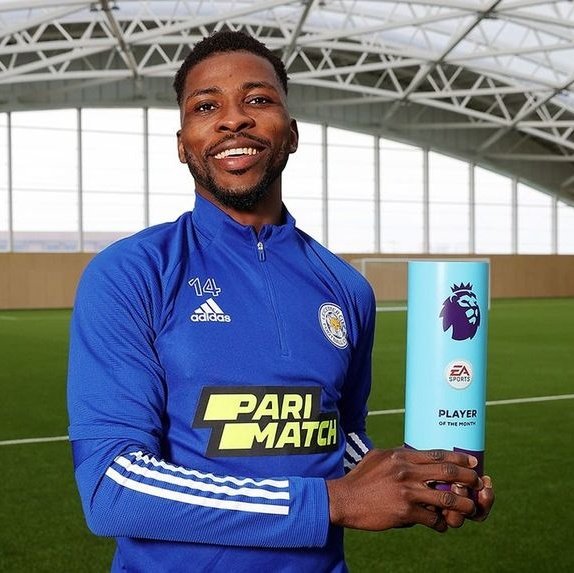 Super Eagles forward Kelechi Iheanacho has dedicated his Premier League Player of the Month award to his teammates and manager.

Iheanacho was voted as named. the Premier League’s EA SPORTS Player of the Month following his outstanding performance for the Foxes in March.

Iheanacho scored five goals in March, including the equalizer against Brighton & Hove Albion, a stunning volley away at Burnley, which was in contention for the Budweiser Goal of the Month award, and a hat-trick in City’s 5-0 win against Sheffield United at King Power Stadium.

Read Also: Rodgers Delighted To Have Iheanacho, Ndidi, Other Back Ahead FA Cup Semis

He was one of eight players shortlisted for the award and beat the likes of Tottenham Hotspur’s Harry Kane, Manchester City’s Riyad Mahrez, and Manchester United’s Luke Shaw to the accolade.

The Super Eagles after receiving the award said, “I’m so pleased and honored to win this award.

“It’s great to be recognized, but I couldn’t have done it without the support of my team-mates and the manager.

“I’m enjoying playing at the minute and hopefully I can push on and help the team to finish as high as possible this season.”

The Foxes are next in Premier League action against Manchester City at King Power Stadium on Saturday.