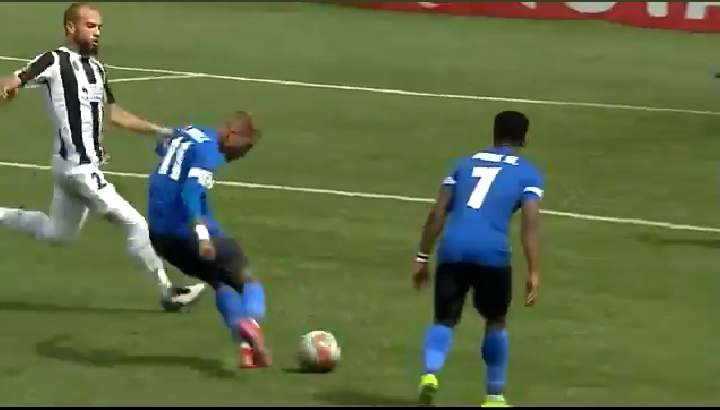 Enyimba FC came back from a goal down to defeat E.S Setif 2-1 in Matchday 3 of  the CAF Confederation Cup at the Aba Stadium.

The People’s Elephant after losing 2-1to Orlando Pirates in South Africa on Matchday 2 retuned back to their A a International Stadium to his the Algerian side.

Armed with their winning record against Algerian side in the continental competition, coach Fatai Osho made four changes to the squad played against Orlando Pirates.
John Noble and Anayo Iwuala who recently returned from international duty with the Super Eagles were handed a starting jersey.

Read Also:CAFCC: It’s Going To Be A Feisty Affair Against E.S Setif- Osho

Tosin Omoyele was preferred to lead the attack ahead of the Victor Mbaoma while Farouk Mohammed played ad defensive midfielder with Dayo Ojo coming in for Anthony Omaka who missed the game.
Samad Kadiri had a strain during warm up to the game and was replaced in the starting line up by Samson Obi.
The visitors settled quickly into the game and we’re already in front in the 13th minute with Monsev Bakrar scoring.
With the visitors already in front, it was dawn on Enyimba that the needed to respond immediately.
They began to push with Oladapo missing a chance to level for his side  from the spot.
Another equalizing chance came in the 35th minute this time it was Omoyele who fluffed the finish from Anayo’s cross.
With five minutes to the first half, Oladapo amended his mistake from a long range shot that found its way into the net of Setif.
Enyimba returned looking more dangerous in the second half as the Algerian gradually withdrew back.
Fifteen minutes into second half, the host overturned the deficit and it was Omoyele who scored to make it 2-1 from an Anayo’s assist.
Enyimba went on to hold on the the 2-1 lead and moved to top of Group A claiming a second win from three games.