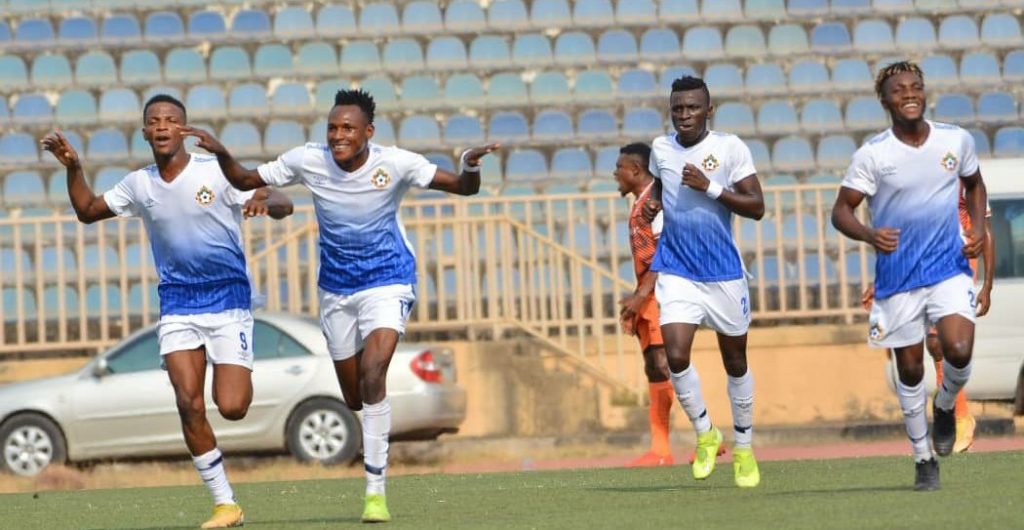 There was so much intrigue and excitement  in the Nigeria Professional Football League (NPFL) as the 2020/2021 season reached the  half way with 19 games played.

With Enyimba involvement in the CAF Confederation Cup, the much anticipated Oriental derby against Enugu Rangers was postponed.

However, other teams were involved in action on Saturday and Sunday.

A total of 18 goals have been scored so far in seven games player on Saturday and Sunday with just two draws and no away win so far.

At the Illorin Township Stadium, Kwara United ended the first stanza of the seasons the league leader.

The Afonja Warriors defeated Nasarawa United 2-0 courtesy two second half goals from Samuel Ganda in the 58th minute and Michael Ohanu in the 81st minute.

Kwara United with the win now top the table with 39 points from 19 games.

Warrior Wolves are back to the relegation zone following a 1-0 loss to Kano Pillars.

Rabiu Ali’s 63rd minute goal condemned the Seasiders back to the last four on the league table.

The Mai Su Gida side now moved to second on the log as they hope to return to continental action n3ct season.

FC IfeanyiUbah held MFM FC to a 1-1 draw at the Agege Stadium as they keep pushing to move out of relegation.

Lukman Aliu 64th minute goal cancelled out a Justice Zachariah 36th curtain raiser for the host as both t3wm shared the points.

Lobi Stars fought back from a goal down to defeat visiting Jigawa Golden Stars 2-1 at the Aper Aku Stadium in Markurdi.

Wikki Tourists climbed to 12th place on the league table after an emphatic 3-1 win against Katsina United in Bauchi.

Joseph Atule levelled for the visitors before Garba scored his second of the game to restore the lead a minute before the hour mark.

Stephen Chukwude put the game beyond reach for the visitors 18 minutes from time to make it 3-1.

Emmanuel Charles got Dakkada FC running in the 23 minutes.

Rivers United responded with two goals as Nelson Esor scored in the 39th and 44th minute to turn the tide on it’s tail.

Musa Bashiru levelled for the host on the brink of first half as both teams headed to first half break levelled on 2-2.

Bashiru scored his brace to restore Dakkada earlier lead bringing the scoreline to 3-2.

Christian Ekong put an icing to the cake in the 76th minute to make it 4-2.

Matchday 19 games will continue on Monday with Abia Warriors hosting Plateau United while Adamawa travel to Owerri to trade tackles with Heartland FC.