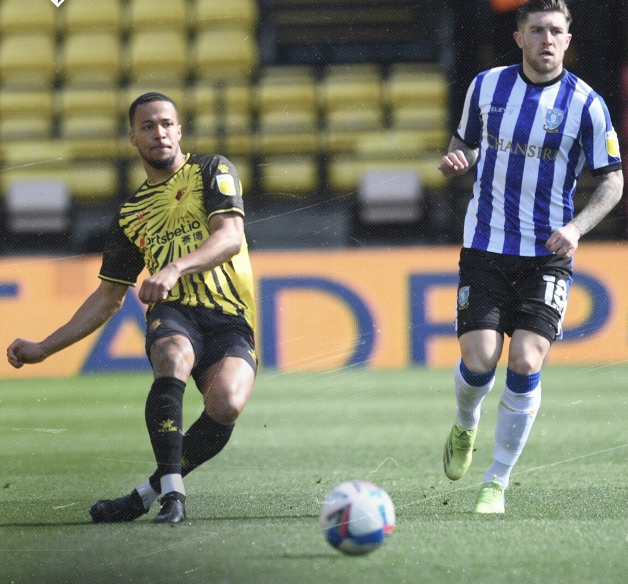 was a busy weekend of action for Nigerian internationals plying their football trade in Europe over the weekend.
After the end of the international break that saw some players representing the Super Eagles in the Africa Nations Cup (AFCON) qualifier,  focus was shifted to club action.
AfricaTopSports tracked the performance of some players that were on duty for the Super Eagles and others who could not make it.
In England, William Troost-Ekong was voted as Man of The Match as Watford extended their win streak to six games.

The Hornets defeated Sheffield Wednesday 1-0 to keep hope of getting  automatic ticket back to the Premier League in tact.
Ola Aina featured for Fulham who suffered a disappointing 3-1 loss to Aston Villa.
Aina played in the full 90 minutes and made two tackle with four clearances.
Kelechi Iheanacho and Wilfred Ndidi both featured in Leicester City’s defeat vs Manchester City.
Iheanacho who just signed a contract extension with the Foxes till 2024, played 72 minutes before he was substituted.
While his compatriot Ndidi was in action for 83 minutes before he was replaced by Nampalys Mendy.
Semi Ajayi impressed in West Brom’s stunning 5-3 victory over Chelsea at Stamford Bridge.
Ajayi was in action through the whole duration and made three tackles and three interception.
Chidozie Awaziem captained Boavista to a vital 2-0 away win against Belenenses SAD in the Primeira Liga.
Awaziem who was at his best made 7 clearances and four interceptions as Boavista moved up to 15th place on the table.
Chidera Ejuke was involved in full time action with CSKA Moscow that defeated FC Tambov 2-1 away.
Ejuke made 97 percent passing accuracy but was not in the score sheet as CSKA Moscow moved to 4th place on the Russia Premier League. 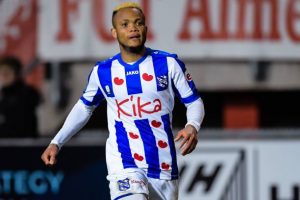 Maduka Okoye was in goal post as Sparta Rotterdam fought hard to defeat FEC Zwolle 3-2 in the Dutch Eredivisie.
Okoye made four saves with 74 per cent passion accuracy. 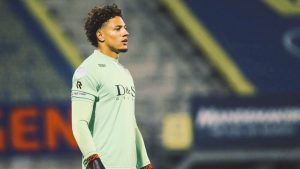 It was a disappointing moment for Tyrobbw Ebuehi who played 90 minutes in FC Twente 2-1 loss at home to Vitesse.
Ebuehi made three tackles and two clearances.
The same fate befell Oghenekaro Etebo and Henry Onyekuru who were in action for Galatasaray.
Etebo played 90 minutes while Onyekuru was in action for 81 minutes as Galatasaray suffered a 3-0 loss to Hatayspors.
Kingsley Ehizibue and Dennis Bonaventure both featured in FC Koln’s 1-0 narrow defeat away to Wolfsburg.
Ehizibue played 90 minutes while Bonaventure made a 9 minutes cameo appearance.
In the Italian Serie A, Victor Osimhen and Simy Nwankwo both score in Napoli’s entertaining victory over Crotone.
Osimhen scored Napoli second goal while Simy’s brace was not enough to stop Napoli from winning 4-2. 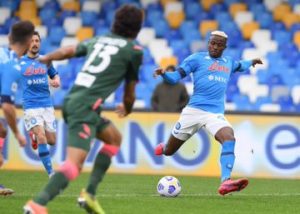 Both Super Eagles players played for 90 minutes.
Samuel Chukwueze was in action for 27 minutes as Villarreal defeated Granada 3-0 away.
Chuwkueze who joined the fray in the 63rd minute make just one key pass for his team.
It was a disappointing result for Sadiq Umar as his club Almeria suffered 1-0 loss at home to Rayo Vallecano.
Umar played 88 minutes before he was replaced as Almeria ended the game with 10 men.