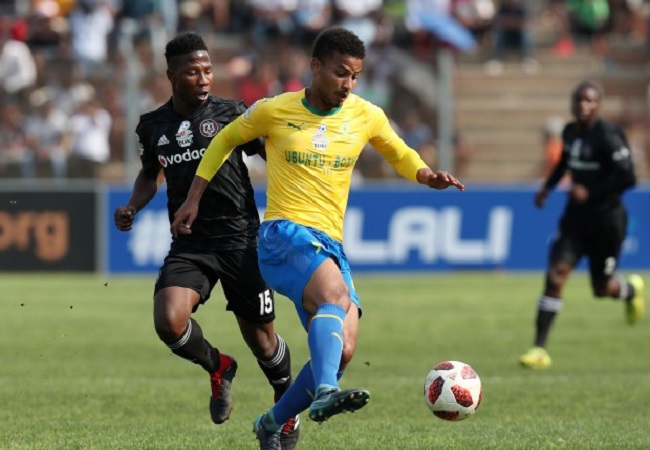 Mamelodi Sundowns recorded 4-1 win over Orlando Pirates in a Nedbank Cup quarter-final clash at Loftus on Thursday. Commenting on that emphatic victory, the Downs coach Manqoba Mngqithi had high praise for Rivaldo Coetzee. As he has compared the midfielder with modern greats of the world game. He believes Coetzee can stand as Sergio Busquets of Barcelona and Manchester City’s Brazilian midfielder Fernandinho.

At one point, after joining Mamelodi Sundowns from Ajax Cape Town, Coetzee’s career had looked in jeopardy due to a recurring foot issue. Which had even cost him a move to Glasgow giants Celtic. He did not play at all in the 2017/18 season for Downs.

However, he was given the time to rehabilitate at Sundowns. And he has gradually made his way back to full fitness. In the process, the man from the Northern Cape has also been converted from the central defensive position he played at Ajax into a deep-lying midfielder.

He’s also regained his place in the Bafana Bafana setup, having been called up for the recent Afcon qualifiers. And he is starting to reach his full undoubted potential, as was underlined with another classy display against Pirates in Pretoria.

“His passing range is unbelievable. And we knew when we converted him into central midfield that very few midfielders have the passing range of Rivaldo.” Mngqithi told SuperSport TV after the Nedbank Cup victory.

“At times players can rush their decisions. But Rivaldo is always relaxed. And he is always making sure that his passes are as precise as we want.”

Coetzee made his Bafana debut in an African Nation Cup qualifier against Congo in October 2014 at just 17-years-old. At that time, he was the youngest player ever to represent the senior national team. A record Fagrie Lakay broke later broken.

Certainly, he was given an outstanding start in the game by Ajax, who first recognised the talents of the Kakamas-born player.

“Credit should be given to the development that he got – all of the coaches who have worked with him must get credit.” Mngqithi added.

“For me Rivaldo can play for any big team in the world in that position. If you compare him with all the top central midfielders, you’ll find Sergio Busquets and Fernandinho in that space.

“He’s got those qualities. And he performs at the highest level. His intellectual capacity and comprehension of tactics are out of this world.” He continued.