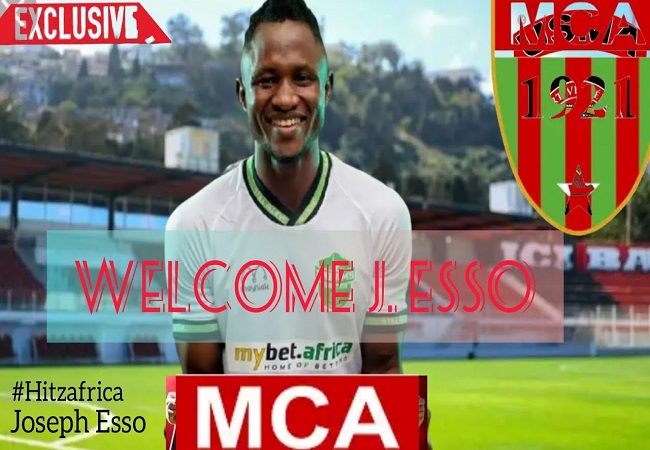 Joseph Esso landed in the capital city on Friday to finalize the dead subject to passing his mandatory medicals test.

“Algeria’s MC administration informs its dear supporters it has bought the contract of 24-year-old Dreams Ghanaian striker Joseph Esso to MC for three years. And the administration will serve to recruit one or two players to support this transfer. Long live the newborn.” Maloudia have announced on their official Facebook page.

Esso’s transfer comes only two days after leaving Ghana’s camp following their matches against South Africa and Sao Tome and Principe in the 2022 Africa Cup of Nations qualifiers, although he did not feature in either.

While this was his first call-up to the main Black Stars side, Esso has made headlines playing for the B outfit. As he netted twice at the 2019 Wafu Zone B Cup of Nations in Senegal, where Ghana finished as runners-up.

After the tournament, he was heavily linked to Sudanese side Al-Hilal Omdurman. But no deal materialised.

Esso, one time on the books of Ebusua Dwarfs, joined Dreams in August last year after failing to reach a contract renewal agreement with 19-time GPL champions Heart of Oak. He was linked with league giants Asante Kotoko before sealing a deal with Dreams.

The dead-eye sharpshooter will put pen to paper on a three-year contract per reports.

Esso was the second-best scorer in the Ghana Premier League — netting 11 goals for Dreams FC before his departure.

The 24-year-old joined the Dawu-based outfit as a free agent at the start of the season from Hearts of Oak.