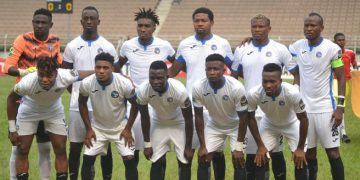 Enyimba Chairman Felix Anyansi Agwu has thanked the Abia State Governor Okezie Ikpeazu for coming to the rescue of the club.
The People’s Elephant were faced with flight issues ahead of their CAF Confederation Cup game against Al Ahli Benghazi.
This is coming few days after the team returned back from Algeria after their game against ES Setif.
There was fear that the team could not be able to honour their game against Al Ahli Benghazi due to flight itches and having just arrived from Algeria few days ago.
In the midst of the imbroglio, Dr. Ikpeazu stepped in to salvage the situation by promising to provide a chartered flight t9 convert the team to and fro Libya.

The team is now scheduled to jet out of the country on Tuesday night to honour the game, which is now scheduled for 10pm on Thursday April 22.
Reacting to the magnanimity of the sport loving Governor, Anyasi said his intervention averted what would have been an embarrassment to the club and the country at large.
“I am deeply grateful to the governor for this very kind and generous gesture.
“His intervention has averted what could have brought embarrassment and ridicule, not just to Enyimba but to Nigeria as a country.
“I also want to thank the NFF President, Amaju Pinnick, for the role he played in ensuring that we are now at this point where we are sure of playing the match in a convenient atmosphere.
“He took it upon himself to ensure that everything is fine for us to honour the game”
Enyimba are second in group A with six points from four matches, two points behind leaders Orlando Pirates who the People’s Elephant will face on the final matchday.