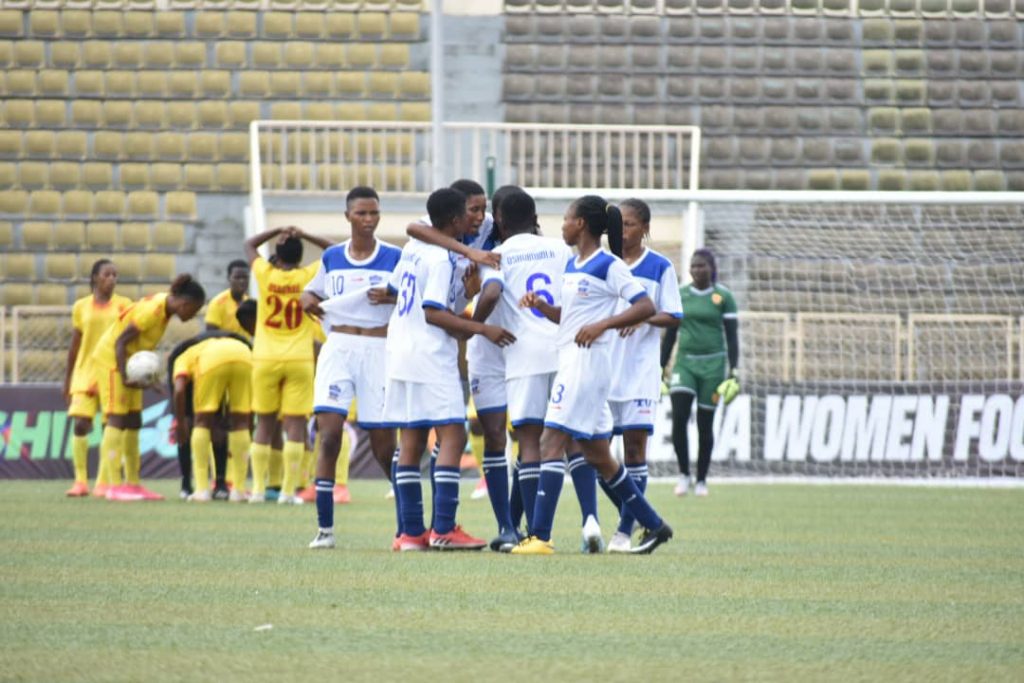 The board of the Nigeria Women Football League(NWFL) under the leadership of Aisha Falode have decided to put players welfare at the forefront.

The NWFL to this end on Monday announced a revised league fixtures for all the six clubs participating in the NWFL Super Six.

According to a statement afterthe Day One matches, the board decided that the heat experienced in Ijebu Ode may be injurious to the players.

Read Also: NWFL Super Six: Delta Queens Off To A Flyer With Win Over Edo Queens

The statement which was received by en.africatopsports.com reads as follows;

“The board of the Nigeria Women Football League, has announced a revised league fixtures for all the clubs taking part in the NWFL Super Six.

“According to the Chairperson of the NWFL, Aisha Falode, the revised fixtures is aimed at forestalling the nagative impact the heat in Ijebu Ode is generating at the moment,

which may be injurious to the health and well being of the players as it was experienced by all the teams in the Super Six, especially the teams that played at 2pm.

Speaking on the new development, the NWFL chairperson Falode, noted that the heat in Ijebu Ode was too intense, such that, in all the three matches played on Monday, the referees had to call for water break to prevent the players from dehydration, considering the intensity of the heat.

“For us at the NWFL, the well being of the players is upper most to us.

“We want a healthy competition and a level playing field that won’t be affected by the intense heat, it is all for the good of the game.

” It is in view of this, that, we have resolved to revise the Super Six fixtures to sooth all the teams.

“Starting from tomorrow, the remaining matches of the Super Six will start at 10am for the first game, the second game starts at 12 noon, while the third game starts at 4pm.

“This leaves only the fixtures for 12 noon to witness the water break, while there won’t be water break at the 10am and 4pm fixtures.”

“For proper monitoring of all the matches by the organisers going by the sensitivity of all the games.

“Starting from Tuesday, April 20, 2021, which is the Day two of the Super Six, that all three games each match day, would be played at the main bowl of the Dipo Dina International Stadium, Ijebu-Ode, until the final day on April 25, when the three matches will be played simultaneously at the three available venues, the main bowl , the practice pitch one and two,” Aisha Falode said.

With the revised fixtures, the first match of the Day Two on April 20 between Sunshine Queens and Edo Queens comes up at 10am.

Second match of the day; FC Robo vs Bayelsa Queens holds at 12 noon, and the third game; Delta Queens vs Rivers Angels holds at 4pm.

Wednesday April 21, is the first Rest Day, while matches resume on Thursday, April 22, and continue on Friday April 23.

There is Rest Day 2 on Saturday April 24, while the final matches hold on Sunday, April 25.